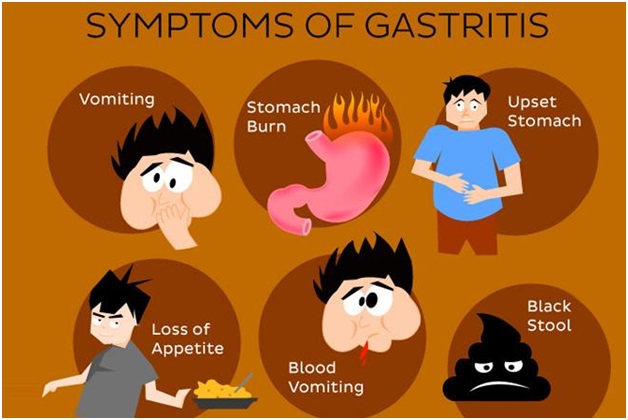 Gastritis has become a common phenomenon among young as well as adults in India due to fact that our food contains high amounts of spices. Current lifestyle of working at odd hours, eating at odd hours like, midnight biryani lead to adverse effects on digestive system. Let’s know more about Gastritis, what are its main causes, symptoms and treatment options.

Gastritis is an inflammation, irritation, or erosion of the lining of stomach. It may occur suddenly as a short episode (acute) or may be for a long duration (chronic). Gastritis is believed to affect half of the population. The disease becomes more common as people get older. Spicy food is only one of the causes of gastritis. Let’s look at the others in detail.

Common causes of gastritis include:

H. pylori is a bacteria found usually in the mucous lining of the stomach. H.pylori is present in gastric mucosa of most of the human beings and it plays an important role in the natural stomach ecology. However, sometimes it leads to an infection and development of chronic gastritis and in some individuals it progresses to other complications like gastric ulcer, gastric neoplasias and stomach cancer.

A type of anemia that occurs when the stomach lacks a naturally occurring substance needed to properly absorb and digest vitamin B12. The loss of ability to absorb vitamin B12 is the most common cause of adult vitamin B12 deficiency.

Backflow of bile into the stomach from the bile tract. Bile tract connects the liver and the gall bladder. Bile is a yellowish fluid produced by the liver that aids in digestion of lipids in the small intestine. Backflow of bile in stomach can have adverse effects.

Nonsteroidal anti-inflammatory drugs are a drug class that groups together drugs that provides pain killing and fever reducing effects. Long term usage of NSAIDs cause gastric erosions, which can become stomach ulcers.

Less common causes of Gastritis include irritation caused due to excessive usage of alcohol, smoking, severe illness, chronic vomiting, stress and autoimmune problems among others.

Diagnostics for gastritis involve complete review of your medical history and performing a thorough physical evaluation. The Gastroenterologist  will interview the patient about symptoms, complete medical history, lifestyles and habits, and any medications taken by the patient. Generally, this information is enough to make the diagnosis in many people. Sometimes, it is recommended to go for

You can book an appointment for online consultation in Apollo Hospitals Apollo Edoc with the best Gastroenterologists here.

Once the diagnosis of gastritis is confirmed, treatment can begin. Treatment, to some extent, depends on the cause of the gastritis. Treatment for gastritis generally involves

The patient’s stomach often heals over time if the underlying cause is identified and corrected. It is generally advised to consult a specialist doctor, most likely a Gastroenterologist.

Eating smaller, more frequent meals and avoiding foods that are spicy, acidic, fried or fatty will help reduce symptoms. Taking alkaline rich food like spinach, cucumber, capsicum help in reducing the pain and have a positive impact on the stomach. Food that stop H. pylori growth and soothes gastric symptoms include