What is Adenocarcinoma (Stomach Cancer)? 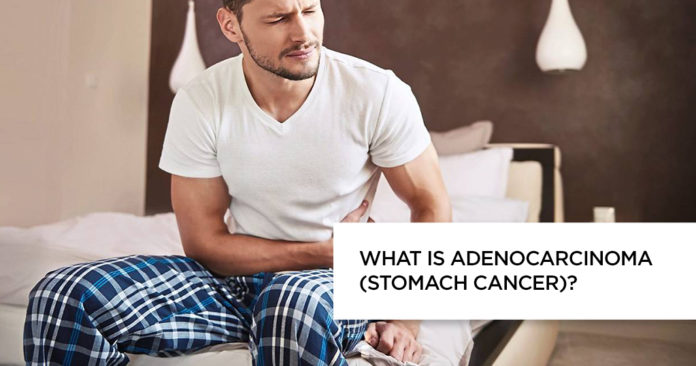 Adenocarcinoma of the stomach is a type of stomach cancer or gastric cancer. It is an accumulation of abnormal cells that creates a mass in your stomach.

Some people think that the stomach is synonymous with the abdomen, which is why you need to understand the anatomy of the stomach. It is a sac-like organ whose main function is to hold food and digest it by discharging gastric juice. Your abdomen consists of several organs, and each organ has its distinctive function. The stomach is one of them. Thus, you should not confuse stomach cancer with other cancers like cancer of the liver, pancreas, gallbladder, colon (large intestine), or small intestine, as all of these can have different outlooks, diagnosis, and treatments, but can have similar symptoms like nausea, weight loss, or body pain.

From the last several decades, we have seen a significant increase in rates of cancer in the stomach throughout the world. Cancer cells are common in the top part of the stomach (cardia). Adenocarcinoma can be formed in different parts of the stomach, thus, displaying different symptoms, which can also have different outcomes.

Research suggests that approximately 90% to 95% of stomach cancers detected are adenocarcinomas. Moreover, a stomach or gastric cancer diagnosed is almost always Adenocarcinoma.

This cancer is very common in men and is diagnosed at a later stage (after the late 50s), so it is important to stay alert.

Your stomach wall has five layers.

● The inmost layer is known as Mucosa. At this layer, stomach acid and digestive enzymes are formed. And this is most vulnerable to stomach cancers, as it starts in this layer.

● Then, next to Mucosa is a Submucosa. It is a connective tissue. It allows the Mucosa to move flexibly.

● The third innermost layer is a thick layer of muscles called Muscularis Propria, which is used for moving and mixing the stomach contents.

● The last two layers that wrap the stomach are Subserosa and outermost Serosa, respectively.

As cancer starts from the Mucosa, reaching the other layers shows the severity and how much it has advanced or grown.

What are the possible symptoms of stomach cancer?

● Soreness in the breastbone.

As these symptoms are extremely common in other medical conditions, diagnosis without biopsy is not possible. So, if you have swallowing difficulties along with the above-mentioned symptoms, it is better to get a medical assessment.

When the stomach cancer gets more advanced, you can see a few other symptoms like:

What are the risk factors associated with stomach cancer?

A history of obesity and GERD are the main risk factors of gastroesophageal junction cancer. Factors that enhance your risk of developing stomach cancer are:

● A family history of stomach cancer

● A diet consisting mainly of smoked and salty foods

● A diet that consists of almost no fruits and vegetables

What are the possible causes of stomach cancer?

Stomach cancer doesn’t happen quickly. These cells develop slowly over the years. Before the stomach cancer develops, the patients have pre-cancerous changes in the mucosa layer. However, these changes hardly show any symptoms, which is why it’s hard to detect without a biopsy in the initial stage.

Cancer begins when an error (mutation) that occurs in a DNA of the cell. The mutation causes the cell to grow and divide at a fast pace and to continue living while a normal cell would die. The accumulating cancer cells develop into tumour that may invade nearby structures. In addition, these cancerous cells can break off from the tumour and spread throughout the body.

How is Adenocarcinoma of the stomach diagnosed?

As stomach cancer is hard to detect, when it comes to the diagnosis, you need to pay a visit to a medical practitioner if any of the symptoms occur. If you are suspected of having cancer, the doctor will go through the medical and family history along with the symptoms. Based on that, the physical examination will be done.

A thin tube with a small video camera is passed down your esophagus. This helps check if any cancer cells or mass have developed in the stomach. If any foreign agent is found, then a biopsy is done, which means a small piece of mass is collected for analysis.

Ultrasound, CT, MRI, and a barium swallow X-ray are some of the imaging tests that are used to confirm the growth of cancer cells. These help in seeing how far cancer has spread and determine further treatment based on the results found.

Book an Appointment with Our Oncologist

What are the stages of stomach cancer?

● Stage I: The tumor is limited to stomach Mucosa, and there is a possibility of spreading to fewer nearby lymph nodes.

● Stage II: Cancer has spread from Mucosa to the stomach wall. Also, the mass may have spread to more lymph nodes.

● Stage III: Cancer has spread through all the five layers of the stomach and nearby structures, or the mass has extensively spread to the lymph nodes.

● Stage IV: This is the stage that indicates cancer has spread beyond the stomach to other areas of the body.

What are the treatment options for stomach cancer?

Your treatment options entirely depend on the cancer stage and your overall health.

Depending on the stage, surgical options may be:

1. Removing early-stage tumors from the stomach lining: A procedure known as endoscopic mucosal resection may be performed to remove very tiny cancer cells that are limited to the inside stomach lining.

2. Subtotal gastrectomy: It involves removing a part of the stomach.

3. Total gastrectomy: It involves removing the whole stomach along with some tissues that surround it. The esophagus and the small intestine are connected after that to let the food move throughout your digestive tract or digestive system.

5. Surgery to relieve signs and symptoms: Removing a portion of your stomach might help reduce the symptoms and signs of advanced stomach cancer.

High-powered beams of energy like protons and X-rays are used to kill cancer cells; this is known as radiation therapy. In this procedure, you the energy beams come from a machine and moves around your body as you lie on a table.

For stomach cancer or gastroesophageal junction cancer, radiation therapy might be used before the surgery (neoadjuvant radiation). This is done to reduce the size of the tumour so that it is easily removable. Radiation therapy could be used post-surgery as well (adjuvant radiation). This is done to kill cancer cells that may be remaining in the region around your stomach and esophagus.

Targeted therapy utilizes drugs to attack certain abnormalities of the cancer cells. This is also used to assist your immune system in killing the cancer cells (immunotherapy),

Is there any prevention of Adenocarcinoma of the stomach (stomach cancer)?

● Have more vegetables and fruits.

● Exercise and manage your weight.

● Avoid or regulate your alcohol intake.

Stomach cancer is hard to detect at an early stage. Thus, if you have any of the symptoms mentioned above or possible risk factors, it is better to get a diagnosis. Stomach cancer detected at the early stage has better chances of being completely eradicated.

Book an Appointment with Our Oncologist