What is Atelectasis? How Do You Figure Out the Causes of Breathlessness? 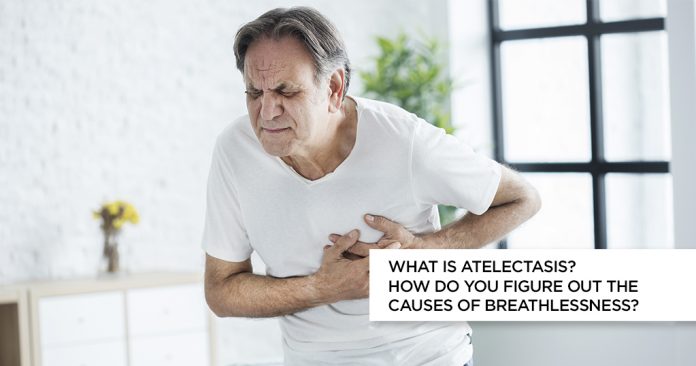 Atelectasis is a condition when there is a complete or partial collapse of the entire lung or area (lobe) of the lung. It occurs when the tiny air sacs (alveoli) within the lungs become deflated or possibly filled with alveolar fluid.

Atelectasis is one of the most common breathing (respiratory) complications after surgery. It is also a possible complication of other respiratory problems, including cystic fibrosis, lung tumors, chest injuries, fluid in the lung, and respiratory weakness. Atelectasis can make breathing difficult, particularly if you already have lung disease. Atelectasis treatment depends on the cause and severity of the collapse.

What are the Types of Atelectasis?

However, no obstructive atelectasis has many other types. It includes the following:

What are the Causes of Atelectasis?

Atelectasis causes include the following:

Other atelectasis causes include:

What are the Symptoms of Atelectasis?

Some of the most common atelectasis symptoms include:

Some patients can experience severe atelectasis symptoms, like pain in the chest region while breathing, due to the severity of the condition leading to a lung collapse.

Atelectasis can progress to a fatal outcome if left untreated. In case of any breathing difficulty, cough, and pain in the chest cavity, consult a doctor as soon as possible. While consulting a doctor, inform them of any pre-existing conditions.

In case you have any surgery scheduled, consult your doctor about the risk of atelectasis and any preventive action to take.

What are the Risk Factors of Atelectasis?

Atelectasis can affect some people more than others due to their underlying risk factors.

Some of these risk factors include:

What are the Complications of Atelectasis?

Those who develop this condition may also face certain complications, which include:

What are the Treatment Options for Atelectasis?

Atelectasis treatment is dependent on the severity and the existence of underlying conditions.

Some treatment options for atelectasis include:

A ventilator will help you breathe until the lungs repair themselves or the underlying conditions and causes are treated in the most extreme case. In case of any difficulty breathing, it is essential to seek medical advice as soon as possible.

Book an Appointment With pulmonologist

What are the Preventive Methods for Atelectasis?

Here are some of the preventive measures for atelectasis:

What are the three types of atelectasis?

The three common types of atelectasis include the following:

How do you do deep breathing exercises for atelectasis?

Deep breathing exercises can help re-expand the collapsed tissues of your lungs. Therefore, it is highly advisable to practice these exercises way before your surgery. You can perform deep breathing exercises using incentive spirometry. It is a device that aids in deep coughing and leads to increased lung volume and reduced secretions.

What does dependent atelectasis mean?

Gravity-dependent atelectasis is a type of lung atelectasis. It happens in the dependent areas of your lungs due to increased perfusion coupled with reduced alveolar volume.

What is the difference between pneumothorax and atelectasis?

When air enters the pleural area, i.e., the region that lies between your chest wall and lungs, the lungs happen to collapse. If the collapse is a total one, it is known as pneumothorax. However, if a portion of your lungs is involved, it is known as atelectasis.

Yes, the condition at its most severe can lead to collapsed lungs and death.

Chest pain, especially while breathing, can be a symptom of atelectasis. In case the condition is caused due to an injury, you can expect pain due to the injury and the condition.

How do I know if my lungs are damaged?

The quickest way to know if your lungs are damaged is by consulting a doctor who might investigate further. The most visible sign is extreme difficulty breathing and a wheeze while breathing.

Book an Appointment with Pulmonologist

What is an Intensive Care Unit ?

All You Should Know About Home Quarantine

COVID-19: Caregiving for the Elderly and Home Infection Control

WAYS TO LIFT-UP YOUR SPIRITS UNDER LOCKDOWN OR SELF-QUARANTINE