HomeHealth A-ZWhat support would you need to have if you have Myasthenia Gravis?
Health A-Z

What support would you need to have if you have Myasthenia Gravis? 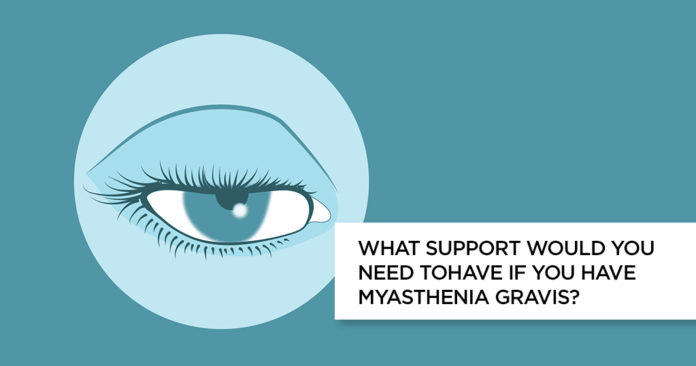 Myasthenia gravis is a condition that causes the muscles to weaken easily. The cause of this condition is the disruption of the communication that takes place between muscles and the nerves. As of now, there isn’t any cure for myasthenia gravis yet, but treatment can help relieve the signs and symptoms.

What is myasthenia gravis?

Myasthenia gravis can be defined as a medical condition that makes your muscles weak and tired easily. For instance, if you have myasthenia gravis, you may notice your jaw muscles getting tired and weak while you are in the middle of your meal. It may make it difficult for you to chew food properly. Once you have rested for a while, the muscles may get stronger again, and you can eat again. This weakening of the muscles – improving with rest and worsening with use – is the common sign of myasthenia gravis.

Myasthenia gravis can affect people of any age group. But younger women below the age of 40 and men older than 60 years are more prone to developing it.

What are the noticeable symptoms of myasthenia gravis?

Myasthenia gravis worsens over time, as the weakened muscle is used frequently. Since the muscle usually improves with rest, the weakness may come and go.

Myasthenia gravis can affect any muscle you control voluntarily in your body, but some parts of the muscles are more affected than others.

In almost 50 percent of the myasthenia gravis cases, the first signs and symptoms are observed in the eye muscle. The symptoms include:

In about 15 percent of the cases, the first symptoms develop around the face and throat muscle. The symptoms include:

If you notice any of these symptoms, consult a doctor immediately.

What are the causes of myasthenia gravis?

The causes of myasthenia gravis are:

The antibodies released by the immune systems can also result in the blockage of a protein known as tyrosine kinase. It is essential in forming the nerve-muscular junction.

The thymus gland is located in your upper chest behind the breast bone and is a part of the immune system. The gland is known to maintain the production of the antibodies that destroy acetylcholine.

In healthy adults, the thymus gland is small in size. But in people suffering from myasthenia gravis, the gland is abnormally large.

In some cases, antibodies blocking acetylcholine or the thymus gland aren’t the causes. Such people have antibody-negative myasthenia gravis. Here, the antibodies destroy another type of protein known as lipoprotein-related protein 4.

What are the complications of myasthenia gravis?

A majority of the complications of myasthenia gravis are treatable, but some can be severe.

It is a life-threatening condition that develops when the muscles that control the breathing become weak. To provide medical help with breathing, emergency treatment may be needed. Blood-filtering therapies and medications are given to help with breathing.

In some cases, people with myasthenia gravis develop tumors in the thymus gland. The tumor is called thymomas and is usually non-cancerous.

Some people with myasthenia gravis develop other autoimmune conditions such as lupus or rheumatoid arthritis.

What are the tests done to diagnose myasthenia gravis?

After reviewing your symptoms and medical history, the doctor will do a physical examination. The tests conducted for the diagnosis include:

The doctor will examine your neurological health by testing your muscle tone, sense of touch, reflexes, coordination, muscle strength, and balance.

A chemical called edrophonium chloride will be injected into your muscles. This will temporarily improve the muscle strength, helping the doctors find out if you have myasthenia gravis.

The chemical helps block the enzyme that breaks down acetylcholine – a neurotransmitter that transmits signals from the nerve endings to muscle receptor sites.

A blood test will be conducted to check for the presence of the abnormal antibodies that destroy the muscle receptor sites.

For this nerve conduction study, the doctors will attach electrodes to your skin where the muscles have weakened. Small pulses of electricity will be sent through the electrodes to check how well the nerve can send signals to the muscle.

To confirm the diagnosis of myasthenia gravis, the doctors will test the nerve repeatedly to check if it worsens with fatigue.

This test is conducted to check the electrical activity traveling between your brain and muscle. Your doctor will insert a fine wire electrode to your muscle to check for a single muscle fiber.

These tests are conducted to check if myasthenia gravis has affected your breathing.

What are treatment options available for myasthenia gravis?

Depending on the severity of myasthenia gravis, how fast it is progressing, your age, and symptoms, the doctor will plan a treatment plan for you. The treatment options include:

Your doctor may give you medicines like neostigmine or pyridostigmine to improve the connection between your nerves or muscles. These medicines will not provide a permanent solution but can improve muscle strength and muscle contraction.

Few of the side effects of this medication include diarrhea, sweating, gastrointestinal upset, nausea, and excessive salivation.

Corticosteroids such as prednisone help with inhibiting the immune system and limit the production of abnormal antibodies.

But, prolonged use of corticosteroids can lead to severe side effects such as diabetes, weight gain, bone thinning, and increased risk of infections.

Medications such as mycophenolate mofetil, methotrexate, azathioprine, tacrolimus, and cyclosporine will help alter your immune system. These medications may take months to work and sometimes are prescribed with corticosteroids.

Some serious side effects of immunosuppressants are kidney or liver damage and increased risk of infections.

This therapy is similar to dialysis. The antibodies will be removed from your blood by routing it through a machine. However, this therapy helps only for a few weeks. Repeated procedures can lead to serious problems such as difficulty in assessing veins during the treatment.

This therapy will provide normal antibodies to your body, to alter the immune system response. The benefits are visible in a week and can last up to three to six weeks.

This treatment is prescribed to patients who don’t respond to other treatments. Intravenous medications such as eculizumab and rituximab are used in this treatment.

In some cases, people with myasthenia gravis have thymoma – a tumor in the thymus gland. The doctor will then remove the gland.

Even if you don’t have a thymoma, removal of the gland can help improve your myasthenia gravis symptoms. But the benefits of this surgery can take years to develop.