What you Should Know About Severe Allergic Reactions 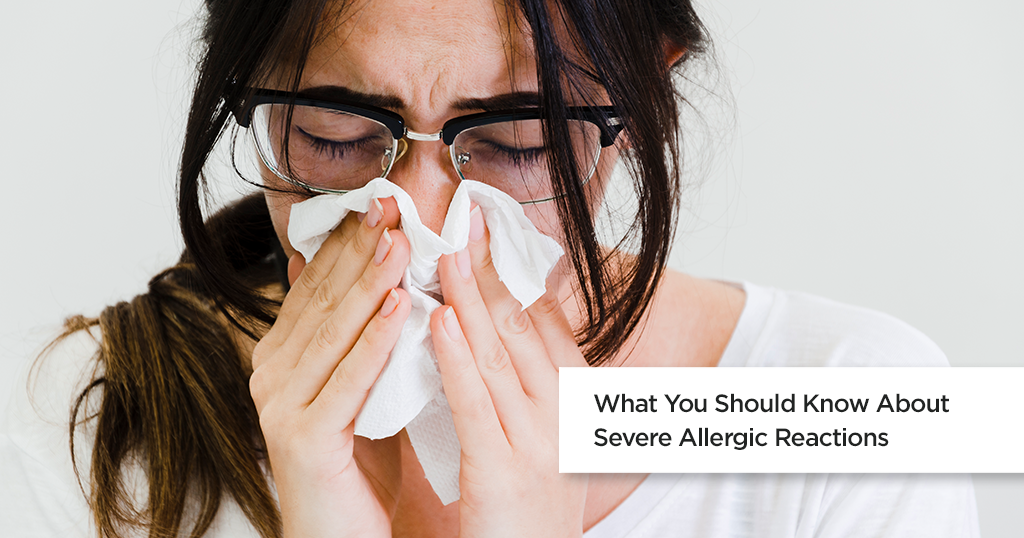 What is an allergy?

An allergy is a hypersensitivity disorder of the immune system. It is the body’s reaction to a common harmless substance in the environment.

How an allergy occurs

When the human body comes into contact with an allergen (a substance that causes the allergy), it initiates certain responses. Components like mast cells, basophils and some white blood cells are released in response to an antibody (a substance produced by the body when it detects a foreign substance called an antigen). Also, certain chemicals like histamines and cytokines are produced, causing inflammation. In some cases, angioedema and swelling of eyes, lips and other parts of the body are seen, and if the tissues inside the throat get swollen, they can block the airway causing death.

Some allergic reactions can be fatal if not treated immediately

There are three severe allergic reactions which require prompt medical treatment as the person’s life can be in jeopardy, namely:

It is a severe allergic reaction involving the entire body, causing low blood pressure and inability to breathe — which can be life-threatening if not recognized and treated timely.

This severe allergic response occurs to an antigen that the body has been exposed to earlier, but the antibody response at that time had been minor. In some cases, the first reaction wouldn’t have occurred. So this time, the body assumes that the antigen is a foreign substance and launches a major attack against it.

The release of Immunoglobulin E is a given in a true anaphylactic reaction. Other chemicals like histamine are released, in addition to some chemicals called mediators, which act on the body to cause the symptoms.

People who suffer from eczema, hay fever and asthma are more likely to have an anaphylactic reaction. This reaction occurs rapidly in most cases and no time should be lost in taking the person to the hospital. The symptoms primarily involve the heart, airways and skin primarily.

The condition is diagnosed on the basis of accurate history from the patient or relatives and by examination. No test can reveal this diagnosis.

It is divided into immediate treatment by the persons closest to him and emergency treatment in a well-equipped hospital.

The first step is to secure the airway. A tube may be passed from the mouth to the windpipe to maintain a patent airway (endotracheal intubation). In rare cases, an opening in the throat is made by a simple surgery (tracheostomy).

Drugs given intravenously are epinephrine (life-saving in anaphylaxis), dopamine to restore the blood pressure, steroids and anti-histamines.

Complications that may occur in case of Anaphylactic Shock

In rare cases, death may occur due to cardiac arrest (heart attack) or bronchospasm (severe constriction of the small air passages in the lungs).

This is a reaction similar to anaphylactic shock but without the release of Immunoglobulin E. However the symptoms, treatment and risks are the same.

It is an extreme manifestation of urticaria. It causes massive swelling and affects the face, lips and limbs. It has a sudden onset and is generally drug induced.

Sudden diffuse swelling of the eyelids and lips is common with inability to open the eyes. Face looks distorted. Other sites include hands, forearms, feet and genitals – scrotum and penis in men and vulva in women.The most dangerous involvement is swelling of the larynx (upper part of the windpipe and voicebox).If the inner lining of the larynx (laryngeal mucosa) swells up, it causes laryngeal oedema, which may be fatal due to the airway getting completely blocked.

The person must be rushed to the hospital. Intra-venous antihistamines, steroids like hydrocortisone and if required, epinephrine is administered.If the airway is blocked, the same measures must be taken as in anaphylactic shock. The person must be observed carefully for the next few hours.

If the trigger is identified it must be strictly avoided

Verified By Apollo Dermatologist
https://www.askapollo.com/physical-appointment/dermatologist
The content is carefully chosen and thoughtfully organized and verified by our panel expert dermatologists who have years of experience in their field. We aim to spread awareness to all those individuals who are curious and would like to know more about their skin and beauty
Facebook
Twitter
WhatsApp
Linkedin
Previous articleAll About Wheat Allergy
Next articleTulsi and Haldi Immunity Drink (Concoction) May Be Ideal to Boost Immunity in COVID-19 Patients
RELATED ARTICLES
Allergic Reactions

All About Wheat Allergy

What you Should Know About Severe Allergic Reactions

How severe can allergy reactions become?