HomeHealth A-ZWhy is it so Important to Get Vaccinated for Diphtheria?
Health A-Z

Why is it so Important to Get Vaccinated for Diphtheria? 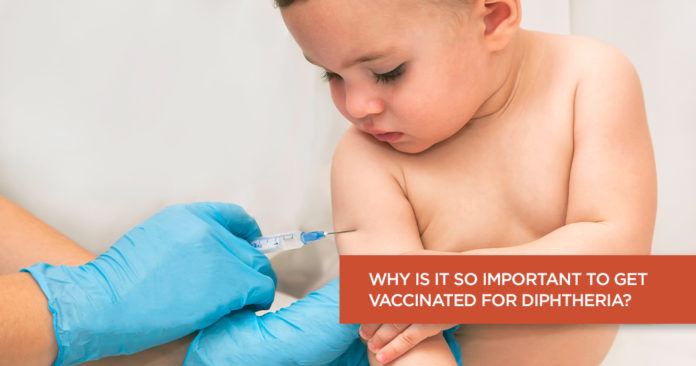 Diphtheria is a contagious bacterial infection. The bacteria target the mucous membrane of the throat and nose. Owing to extensive vaccination, diphtheria is nowadays a rare occurrence.

While diphtheria can be treated , severe forms of the infection can heavily damage the vital organs and can even be fatal. The fatality of the disease is more common in children than in adults.

Diphtheria and the need for vaccination

Diphtheria is caused by the bacterium Corynebacterium diphtheria. This bacterium, upon infection, produces a harmful toxin that can even cause kidney and nerve damage myocarditis in certain severe cases. One of the major symptoms of diphtheria is the difficulty experienced in breathing and swallowing as this toxin supports the build-up of dead tissue in the throat.

Due to the severity of the infection, vaccination has been deemed a necessity, and several vaccines have been developed to combat this. The widespread vaccination has markedly reduced the morbidity and mortality of the disease. The challenge continues to lie in countries where diphtheria is an endemic disease and springs out as small outbreaks. The vaccination primarily involves the administration of the inactivated toxin. This is administered in combination with other vaccines that prevent tetanus, and pertussis.

Diphtheria can be broadly classified into two types. These are:-

● Affecting the mucous membrane of the throat and nose

While the former is more common and more prevalent than the latter, diphtheria infection of the skin causes redness, inflammation, and swelling. The skin infection is prominently seen in those who do not maintain proper hygiene.

Symptoms of a diphtheria Infection

The symptoms of diphtheria begin two to five days after infection. The signs that indicate towards diphtheria infection are:

Diphtheria signs and symptoms generally begin 2-5 days after a person becomes infected and may include:

1. A gray, thick membrane covering your tonsils and throat

2. A hoarseness and sore throat

Some people would not show the necessary symptoms of the disease and are hence referred to as carriers since they spread the disease unknowingly.

The diphtheria infection of the skin is less common and is characterized by inflammation and a grey patch developing on the skin.

Since diphtheria is a contagious disease, utmost urgency must be followed for anyone who has been recently exposed to the disease. You must immediately meet the doctor if you are showing any of the signs and symptoms mentioned earlier. It is also essential to maintain a chart and get the vaccinations done for your child as soon as he/she is born to prevent the disease in the future.

Infection by the bacterium Corynebacterium diphtheriae causes diphtheria, wherein the bacterium multiplies in the mucous membrane of the throat and nose. Diphtheria is a contagious disease, and you can acquire the infection in the following ways:

1. Droplets – Inhalation of the droplets from a sneeze or cough of the infected person can also infect you. This mode of transmission is one of the most common routes of infection of the disease.

2. Contaminated Personal Belongings of an Infected Individual- Reports show that some people can be infected by handling the personal belongings such as towels and used tissues of an infected individual. It is, therefore advised, to not touch such items.

What are the risk factors of diphtheria?

Apart from this, the risk of infection increases due to the following reasons. These are:

● Living in crowded and unhygienic, and unsanitary conditions

● Travel to a diphtheria affected region

What are the complications of diphtheria?

Diphtheria infection is treatable at the early stages, and you can be completely cured, but when left untreated, it springs out an array of complications that adversely affect many of the vital organs and its functions. These are:

● Breathing problems. The bacteria that causes diphtheria may produce a toxin, which can damage tissue in the immediate area of infection — generally, the throat and nose. At that area, the infection produces a tough & thick gray-colored membrane comprising dead bacteria, cells and other substances which can obstruct breathing.

● Heart damage. Diphtheria toxin may spread through the bloodstream and damage other tissues in the body, like the heart muscle, causing complications including inflammation of the heart muscle (myocarditis). Myocarditis can cause congestive heart failure and sudden death.

● Nerve damage. The toxin can cause nerve damage as well. Typical targets include nerves to the throat, where poor nerve conduction may cause swallowing difficulty. Nerves to the arms and legs may also become inflamed, leading to muscle weakness.

The diphtheria toxin may paralyse the muscles used in breathing if it damages those nerves. At that point, you may need mechanical assistance to breathe.

You are strongly advised to visit the doctor soon after developing any such symptoms. The doctor would treat you with one of the following:

Antibiotics – Broad-spectrum antibiotics such as penicillin or erythromycin are prescribed to eliminate the bacterial infection. By killing the bacteria in the body, you would also be less contagious to the people around you.

Antitoxin – Since the severity of the illness is due to the toxin released by the bacteria, the doctors may also administer you with the antitoxin intravenously.

Preventing diphtheria is possible by vaccination. Thus, owing to the possibility of mortality and the complications surrounding this infection, vaccination has been deemed important. The diphtheria vaccine (Toxoid) is given in combination with tetanus and whooping cough. The toxoids are known as DTaP for children and Tdap for adults.

This is a five-shot vaccination given to children at two months, four months, six months, fifteen months, and four years of age. The WHO recommends a three series vaccination starting as

young as six weeks with an interval of four weeks followed by three booster vaccination shots starting at one year with approximately a four-year interval.

Your child may develop a mild fever, tenderness at the site of the injection, or drowsiness after the vaccination. You must enquire with your doctor to reduce these effects on your child.

It is, therefore essential, to be vaccinated to avoid being infected by the diphtheria bacterium as the complications and mortality that arise from its infection are extremely high. Vaccination performed at an early age as prescribed booster doses would largely prevent you from having this infection in your lifetime and also provide you with lasting immunity.

1. How is diphtheria diagnosed?

The primary positive indicator of diphtheria infection is the development of the grey membrane on the mucous of the throat or the skin. A sample from this membrane is cultured in the laboratory to further confirm the infection. Another methodology is by sampling the dead accumulated tissue and testing it in the laboratory. Treatment begins as soon as the tests confirm the infection.

2. Is the recovery from diphtheria infection difficult?

Intake of a lot of fluids is recommended. It is also advised to have a liquid diet to ease the pain felt while swallowing food. Special care must be ensured to restore lost nutrition. Due to high infection rates, it is also essential to stay isolated to avoid spreading the disease, and finally, you must vaccinate yourself to prevent the recurrence of the infection.

3. How does diphtheria affect the heart and nerves?

The toxin released by the bacterium affects all the vital organs of the body. On reaching the heart, it causes inflammation of the heart muscles that can progress to heart failure or sudden death. The nervous system is also severely damaged as the toxin affects the nerves that control the muscles required for breathing.

4. What does a toxoid mean?

The diphtheria vaccine is primarily a toxoid. A toxoid is an inactivated toxin that is capable of generating antibodies against diphtheria but is incapable of triggering the disease itself. Both DTaP and Tdap are toxoids administered to children and adults respectively.

5. How long does the immunity against diphtheria last?

After the initial series of vaccinations in the childhood, you may need booster shots of the diphtheria vaccine to help maintain your immunity because immunity to diphtheria fades away with time.

Children who have received all of the recommended vaccines before age 7 should receive their first booster shot at around 11 or 12 years of age. The next booster shot is recommended after 10 years, then repeated at 10-year intervals. Booster shots are important particularly if you travel to an palce where diphtheria is common.

The diphtheria booster is given together with the tetanus booster – the Tetanus-diphtheria (Td) vaccine. This combination shot is administered by injection, generally into the arm or thigh.

Tdap is a combined tetanus, diphtheria and acellular pertussis (whooping cough) vaccine. It is a one-time alternative vaccine for adolescents ages 11 through 18 and adults who haven’t previously had a Tdap booster. It’s also recommended once during pregnancy, regardless of previous vaccinations.