How Bad Is Vaping Compared To Cigarettes? 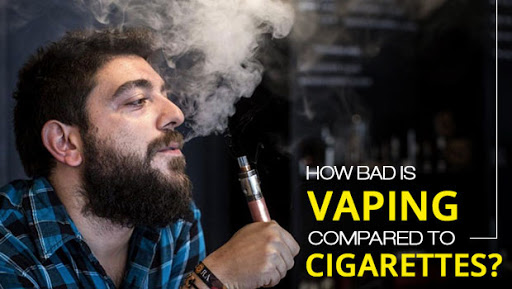 E-cigarettes or vaping is smokable, replaceable or refillable containers or cartridges that hold liquid that contains nicotine, solvents, and chemical flavors. When one inhales vaping, they are putting negative pressure on the device that causes a battery to heat the liquid solution, which is then atomized into an inhalable vapor.

They are battery-operated devices that can appear like a real cigarette or pen. There are hundreds of brands, and they are sometimes marketed as a means of getting your nicotine fixed without the danger of cigarettes.

Each conversation of vaping should involve a comparison with smoking. The reason is that most vapers were smokers, and except for vaping, most vapers would still be smokers. Above that, if vaping survives the huge challenges to its very existence, a large number of would-be smokers will be diverted from cigarette addiction by low-risk nicotine alternatives like e-cigarettes.

But when it comes to real science, far too few Indian studies employ a direct comparison between vaping and smoking. That is probably because researches are done mostly by people in the tobacco control field, and most of them want to see the total elimination of all nicotine use.

So if a paper compares, say, carcinogenic compounds in vapor and smoke, the results will show that smoke contains immensely larger quantities of the things that cause cancer. And pointing that out does not serve the cause of abstinence very well. However, comparing vapor to a clean air makes vapor look bad.

It is not yet known how safe or unsafe these products are. Nonetheless, nicotine is known to be very addictive, and that appears to be a cause for concern. Low doses may cause nausea, abdominal pain, vomiting, and eye irritation. High doses of nicotine may cause tachycardia, seizures, high blood pressure, coma, and death. Moreover, the FDA in India reported detecting ethylene glycol in most of the e-cigarettes and cancer-causing substances called nitrosamines in others. Additionally, some e-cigarettes have caught fire and exploded because of defective batteries or malfunctioning battery chargers.

Again, Popcorn lung (bronchiolitis obliterans) is a lung disease that results in scarring and narrowing of the airways in the lungs. The infection was linked to a chemical, diacetyl that supplies flavor to microwave popcorn. This compound and others that are alike, when inhaled, causes a high risk for this disease.

Other Indian Researchers discovered that 92% of e-cigarettes have at least one of three different compounds identified to cause popcorn lung. Although long-term studies are absent, the Indian Society for Study of Lung cancer Considers e-cigarettes to be a dangerous risk factor for popcorn lung.

There is some concern that vaping is being marketed to attract younger non-smokers with “flavored” liquids such as piña colada, bubblegum, vanilla, and others. Because a large number of e-cigarettes contain nicotine, it is very possible that people can become addicted to them. Several doctors are concerned that if they become addicted to the nicotine in the e-cigarettes, it may be a simple step up to smoking tobacco, which is related to so very many health consequences.

Nancy A. Rigotti, M.D. // Director of the Tobacco Research and Treatment Center at Massachusetts General Hospital & Professor of Medicine at Harvard Medical School