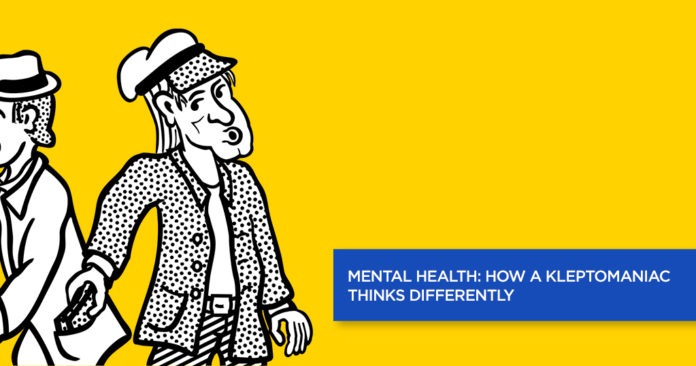 Kleptomania is an impulse control disorder where a person has a constant uncontrolled desire to steal and hoard things, most of which he does not require. A kleptomaniac is aware of the disease but does not have the power to control his temptation even if it is harmful to him and the entire family.

A kleptomaniac generally lives a life of guilt and shame because he feels afraid to visit a psychiatrist or a counsellor out of the fear of being defamed.

A person suffering from kleptomania cannot be treated with medicines, but meditation and counselling can help him deal with this mental health disorder. A kleptomaniac does not suffer in isolation, but the stealing habits inflict emotional pain on family members . Most of the people are unaware that kleptomania is a mental disease and consider the kleptomaniac as a thief .

A kleptomaniac generally steals from a shop or friends and relatives. They mostly steal things that are of no value to them. If you are a kleptomaniac, you generally stash away or donate the stolen items. The urge to steal is sudden and may weaken or become stronger over time.

The root cause of kleptomania is unknown. Low levels of a chemical called serotonin in the brain can be a cause of kleptomania because serotonin helps regulate emotions and actions. Stealing is linked to the release of dopamine. Dopamine is a neurotransmitter that causes pleasure, thus necessitating the urge to steal more.

The easily noticeable symptoms of kleptomania are:

● Feelings of tension or anxiety that can be relaxed by stealing

● The powerful and uncontrollable urge to steal items without any purpose

● You feel pleasure, happiness, or relaxation after a sudden act of stealing

● You feel shameful, guilty of self loathe after an act of impulsive stealing. You might fear that you will be arrested, punished, or defamed

● You will return or donate the objects after stealing them, but the urge of stealing will return. The kleptomania cycle will repeat itself

Complications Due to Kleptomania

Various complications of kleptomania include:

● If a kleptomaniac is not treated on time, it may affect him/her and his/her family emotionally, mentally, and financially.

● A kleptomaniac may suffer from isolation and guilt from the fear of humiliation.

● As the urge to steal is uncontrollable, a kleptomaniac may end up in jail.

● A kleptomaniac may suffer from other impulse control disorders like compulsive shopping, gambling, or alcohol misuse.

● A kleptomaniac can have bipolar disorders or suicidal thoughts.

A combination of physical and psychological evaluation can help treat kleptomania and help the patient understand the nature of kleptomania. Kleptomania can be managed by a combination of medications, psychotherapy, and through support groups.

Medications. There are no FDA approved medicines for kleptomania. Doctors prescribe certain medicines depending on the condition of the patient and if the patient is suffering from other mental disorders along with kleptomania. The doctors may suggest naltrexone, a medicine that can reduce impulsive urges. The doctor may also suggest antidepressants to cure other symptoms related to kleptomania such as depression or suicidal thoughts.

Avoiding relapses: If you feel the urge to steal again, you should not discontinue your treatment. You should contact your doctor, a support group, or a close friend or family member if you have a temptation to steal.

Coping : the most important step in the treatment of kleptomania is self -awareness and the urge to get cured. You need to stick to your treatment plan without missing

therapy sessions. You should identify the situations or feelings that may trigger you to steal. Try to control the urges through meditation.

You should get engaged in healthy hobbies like exercising and yoga to get relief from anxiety and stress.

Support groups: A kleptomaniac can get help from support groups who deal with impulsive disorder diseases. Your psychotherapist might suggest such groups to help you.

The causes of kleptomania are not clear; therefore, it is not known for sure how to prevent it. However, if you start treatment from the very beginning, then you can prevent or stop the disease from becoming worse or leading to other obsessive-compulsive disorders.

Ans: Kleptomania is a form of impulse control disorder. You can identify the situations and feelings that trigger your urge to steal and then try to manage those emotions through meditation and help from support groups. You can keep yourself busy by getting engaged in meaningful activities like exercising and gardening.However therapy works well in helping you overcome kleptomania .

Ans: Kleptomaniacs steal when certain situations or emotions trigger their urge to steal. They mainly steal from public places like stores and malls. They even steal from friends and family members.

3 Is kleptomania a form of OCD?

Ans: Kleptomania can be said to be a form of Obsessive-Compulsive Disorder because of the uncontrollable urge to steal and hoard things without any purpose. Many kleptomaniacs steal and hoard compulsively , which is similar to symptoms of OCD.

Verified By Apollo General Physician
https://www.askapollo.com/physical-appointment/general-physician
Our expert general medicine specialists verify the clinical accuracy of the content to deliver the most trusted source of information makine management of health an empowering experience
Facebook
Twitter
WhatsApp
Linkedin
Previous articleAmenorrhea: Lack of periods and how to tackle it
Next articleBone Density Test – When You Need Them & When You Don’t

Introduction Alcohol Poisoning is a potentially fatal condition that arises as a consequence of drinking an excessive amount of...
Read more
General Health

Introduction Hiccups are involuntary contractions of the diaphragm. Diaphragm is the muscle that separates the chest from your abdomen...
Read more
Health A-Z

Apart from Alcohol Abuse, What Other Factors May Damage the Liver?

The human liver is a very important organ in the human body. It is the size of a football and is essential...
Read more