HomeCOVID-19Understanding COVID-19 Variants In View of Sharp Rise of Coronavirus Infections in...
COVID-19 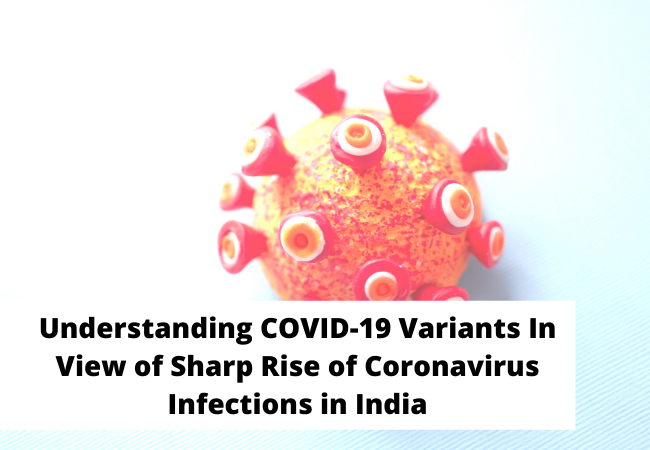 After a brief lull, the number of  COVID-19 cases is once again rising in India, signaling that the country maybe on the verge of a second wave of infection.

While reinfections and easing of lockdown restrictions are cited, emergence of new variants are also said to be the potential driving factors for a sharp rise in coronavirus infections in India.

Scientists are currently studying closely about these variants to learn more and determine whether they spread more easily. So far, studies suggest that antibodies produced through vaccination with currently authorized vaccines recognize these variants. However, this is being closely investigated by scientists and more studies are underway.

Numerous variants of COVID-19 have been identified. The most well-known variants are variants that was discovered first in the United Kingdom (UK) and South Africa. A variant from Brazil is also receiving attention. Lately, A new double mutant strain of the virus that causes COVID-19 has been detected in India. Each variant arose independently and all have unique mutations and mutations in common.

The UK identified a variant called, B.1.1.7 with a large number of mutations, in September 2020. This variant spreads rapidly and more easily compared to other variants. New evidence suggests this variant may cause a small increase in disease severity.

In January 2021, UK scientists reported that this variant virus could be linked to increased risk of death compared to other variants. However, we need more research studies to confirm this finding.  The B.1.1.7 virus has since been detected in many countries across the world. India recorded the first six cases of this variant at the end of December 2020.

Another variant called B.1.351 emerged in South Africa. This variant emerged independently of the UK B.1.1.7 variant. First detected in early October 2020, the B.1.351 variant shares some mutations with B.1.1.7. The South African variant spreads quickly and more easily than other variants. However, currently there is no evidence that B.1.351 causes more severe illness or increases risk of death. The South African variant of COVID-19 was first reported in India in mid-February 2021.

A variant called P.1 emerged in Brazil in early January, 2021. The variant was first identified in travelers from Brazil, who were tested during routine screening at a Japanese airport. P.1 variant contains a set of other additional mutations, which can affect its ability to be recognized by antibodies. The variant seem to spread rapidly and more quickly compared to other variants. This variant was first detected in India in February 2021.

Multiple variants of COVID-19 have been detected from samples collected from all across India. The variants include those that have originated locally and others that have been brought by travellers from other countries.

The Indian SARS-CoV-2 Consortium on Genomics (INSACOG), a grouping of 10 National Laboratories established by the Ministry of Health and Family Welfare, detected VOCs (variants of concern) in several positive samples. However, the genomic variants of various viruses are actually a natural phenomenon and are found in most of the countries across the world.

Although VOCs and a new ‘double mutant’ variant have been detected in India, the health ministry clarified that they have not been detected in numbers sufficient to either establish or explain the rapid increase in cases in some of the Indian states. The National Centre for Disease Control (NCDC) informed that a total of 771 variants were found from over 10,000 samples. These include:

A new double mutant strain of COVID-19 virus has been detected in India recently. This is in addition to other variants that originated in the UK, South African and Brazil already circulating in India. An analysis of the samples collected from Maharashtra revealed an increase in the samples with the E484Q and L452R mutations.

The new virus strain with two mutations, is indicated to be highly infectious and has the potential to skip the immunity developed either by vaccines or natural infection. As the second wave of the COVID-19 pandemic is looming large in India, the development of this new double mutant strain emerges as a cause of serious worry.

The Indian SARS-CoV-2 Consortium on Genomics (INSACOG) has been carrying out genomic sequencing and analysis of circulating COVID-19 viruses, and correlating epidemiological trends with genomic variants.

An increase in the number of COVID-19 cases can put more strain on health care resources. Therefore, continuing to reduce the chances of exposure is the best defense against the variants. Continue to wear a mask, avoid crowded places and maintain physical distance, wash your hand frequently and last but not the least, get vaccinated when you get your turn .