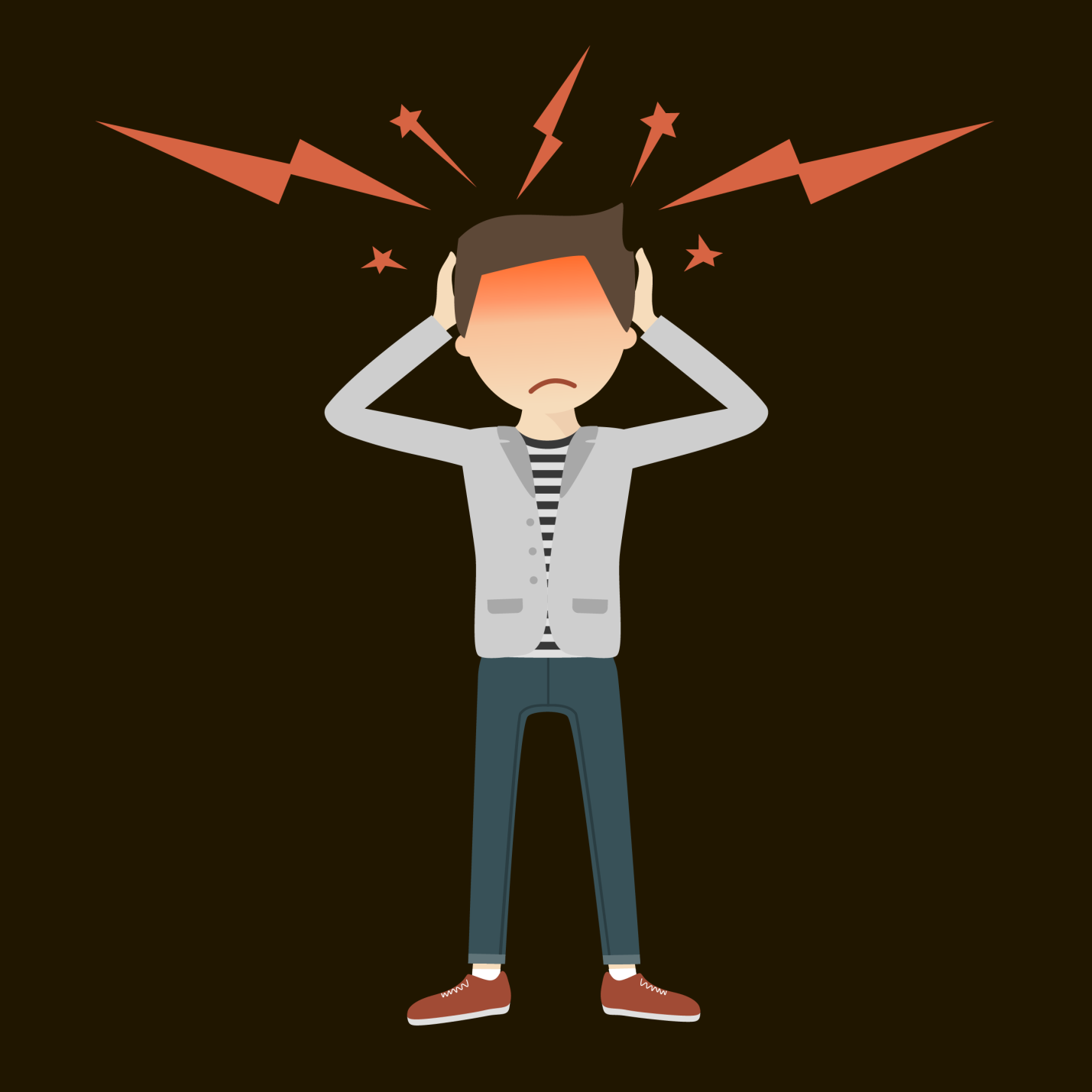 Vertigo is a condition that makes the person feel that themselves or the environment around is moving or spinning. It varies from dizziness in that vertigo represents an illusion of movement. When the subject feels that they themselves are moving, it is called subjective vertigo. The perception that surroundings are moving, it is called objective vertigo. Unlike nonspecific lightheadedness or dizziness, vertigo has relatively few causes.

Vertigo can be caused by the problems in the brain or the inner ear. These include swelling within the inner ear due to a viral/bacterial infection, Meniere’s disease, tumors, decreased blood flow to the base of the brain, multiple sclerosis, head & neck injury, migraine (headaches), or complications from diabetes. Symptoms of vertigo include a sensation of disorientation or motion, which may be accompanied by nausea or vomiting, sweating, or abnormal eye movements. Other symptoms of vertigo may include hearing loss, a ringing sound in the ears, visual changes, weakness, difficulty in speaking, a decreased level of consciousness, & difficulty walking. Vertigo can be diagnosed by a medical history & physical exam. CT scans, blood tests, magnetic resonance imaging (MRI), & electrocardiogram (ECG) may also be performed depending on the suspected cause. Treatment for vertigo includes medications & physical therapy procedures. The diagnosis of vertigo depends on the cause. Some cases of vertigo are self-limiting, while others require drugs & physical therapy.

Vertigo is a sensation of spinning around. It is different from lightheadedness or fainting and motion sickness.

If true vertigo exists, symptoms include a sensation of disorientation or motion. Also, the individual may also have any or all of these symptoms,

The symptoms can be from minutes to hours & can be persistent (chronic) or episodic. The attack may be due to a sudden movement or change in position. It is necessary to tell the doctor about any recent head trauma or whiplash injury, as well as any new medicines the affected individual is taking.

The person may have hearing loss & a ringing sensation in the ears. The person might also have visual disturbances, weakness, difficulty speaking, a decreased level of consciousness, & difficulty walking.

When to Seek Medical Care for Vertigo

Vertigo is not a disease in itself. Once the condition of vertigo is diagnosed & treated, the person can return to healthy living. There are various tests to diagnose vertigo & its causes. The doctor will look for any abnormal eye movements & ascertain that the ability to follow objects is normal. The doctor evaluates the involuntary eye-movements (nystagmus) of the patient. The rapid eye movements produced due to head maneuvers by the doctor may suggest in which ear the problem lies.

The diagnostic devices such as Videonystagmography (VNG), Electronystagmography (ENG), craniocorpography (CCG), Subjective Visual Vertical (SVV), and computerized Dynamic Visual Acuity (DVA) are used to identify the cause of the balance disorder in the patient.

The frequency and severity along with the associated symptoms need to be recognized for the appropriate treatment of each patient.

Some other tests to determine the type of vertigo include

Head-thrust test: You look at the examiner’s nose and the examiner moves your head to the side and looks for correct eye movements.

Romberg test: Stand with feet together and eyes open. Try to maintain balance after closing eyes.

Fukuda-Unterberger test: March in one place with your eyes closed without leaning.

Dix-Hallpike test: While on an examination table, you’re quickly lowered from a seated position to a supine position with your head pointed either slightly right or slightly left. A doctor will look at the movements of your eye to learn more about your vertigo.

Imaging tests for vertigo include

There are various kinds of treatments for vertigo including self-care remedies, medications & physical therapy procedures.

A modified Epley maneuver is a type of physical therapy often prescribed that involves head & body movements done while sitting on a bed. Traditionally, it is conducted in a doctor or physical therapist’s office, but it may also be prescribed to be done at home. Once a patient has obtained proper instruction, this exercise can relieve vertigo symptoms in a week.

Herbal remedies such as ginger root, ginkgo biloba, & coriander may help to decrease vertigo symptoms in few people. Consult a doctor before using any natural treatments.

Acupuncture may give relief for symptoms of a few types of vertigo.

Avoid elements that can influence circulation, including caffeine, tobacco, or alcohol.

Essential oils, including peppermint, ginger, lavender & frankincense, may help relieve symptoms of vertigo. Read all instructions for use & consult the doctor before using these natural remedies, as some can have side effects, particularly if a person has a respiratory illness.

The selection of treatment will depend on the diagnosis. Medication for vertigo can be taken by mouth, through a patch, a suppository, or drugs are given through an IV. Specific types of vertigo may require additional treatment & referral.

– Bacterial infections of the middle ear need antibiotics. A hole in the inner ear causing repeated infection may require referral to an ear, nose, & throat (ENT) specialist for surgery

– For Meniere’s disease, in addition to medication, patients have to be on a low salt diet & may require medication to increase urine output.

– In addition to these, drugs used for benign paroxysmal positional vertigo can be used to treat the condition.

Commonly prescribed medications for vertigo include the following:

Some Over-The-Counter (OTC) antihistamines may also be suggested by the doctor for vertigo, including:

These medicines should be taken only under the supervision of a doctor. Many of these medications can cause drowsiness & should not be taken before driving or working.

– Vestibular rehabilitation exercises, also pointed to as Epley exercises consist of having the patient sit on the corner of a table & lie down to one side until vertigo resolves accompanied by sitting up & lying down on the other side, again until vertigo ceases. This is repeated until vertigo no longer occurs.

– Particle repositioning exercise is a treatment based on the idea that the disease is caused by the displacement of tiny stones in the balance center (vestibular system) of the inner ear. The head is repositioned to relocate the stones to their normal position. This exercise is repeated until the abnormal eye movements are no longer visible.

How Long Does Vertigo Last?

The range of symptoms of vertigo depends on the cause.

For vertigo caused by Mal de Debarquement, such as getting off a cruise ship, vertigo will normally go away on its own within 24 hours.

For patients suffering from benign paroxysmal positional vertigo, the Epley exercise can stop symptoms within a week.

Vertigo caused by swelling of the inner ear (labyrinthitis or vestibular neuritis) will last for days until the swelling subsides.

Attacks of vertigo due to Meniere’s disease can last from 20 minutes to 24 hours.

Vertigo in acoustic neuroma, vertigo lessens or disappears as the tumor grows.

Vertigo from a stroke, either due to blood vessel blockage or hemorrhage, may leave permanent damage to the brain & cause persistent vertigo symptoms.

If vertigo is seen due to head or neck injury (concussion, whiplash, or other trauma), symptoms may persist for years or be permanent.

Managing risk factors for stroke may decrease the risk of developing central vertigo. This includes making sure that blood pressure, cholesterol, weight & blood glucose levels are in optimal ranges. To reduce symptoms of vertigo in cases of Meniere’s disease, regulating salt intake may be helpful. If peripheral vertigo has been diagnosed, then performing vestibular rehabilitation exercises regularly may help to prevent recurrent episodes.

As most cases of vertigo occur immediately, it is hard to predict who is at risk; as such, complete avoidance or prevention may not be possible. But, maintaining a healthy lifestyle will reduce the chances of experiencing this condition.

Many cases of vertigo resolve spontaneously within a few days. The vestibular rehabilitation exercises (Cawthorne head exercises) or modified Epley exercises cause marked improvements in vertigo.

Vertigo is the feel of a sense that the person or the environment around is moving or spinning.

Which body part is most commonly affected in vertigo?

A: The most commonly affected organ in vertigo is the inner ear.

What are symptoms of vertigo?

A: Symptoms include a sensation of disorientation or motion, nausea or vomiting, sweating and abnormal eye movements.

Apollo Hospitals has the best Vertigo treatment doctors in India. To find the best vertigo doctors in your nearby city, visit the links below:

What is Hashimoto’s disease?

What could be the cause of your sore throat ?

Have you recently noticed any pain or aches in your throat with difficulty in swallowing? Well, you might have a sore throat....
Read more
ENT

A white or gray patch on the tongue or the floor of the mouth is called Leukoplakia. This patch forms due to...
Read more