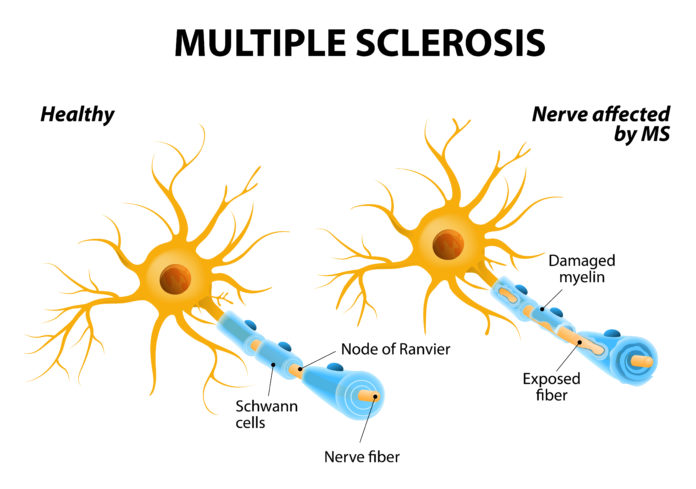 Multiple sclerosis is a chronic disorder affecting the central nervous system. It affects the brain and the spinal cord and can cause permanent nerve damage.

What Is Multiple Sclerosis?

Multiple sclerosis is of four types. It also defines the stages. They are:

Vision problems are also common, such as:

Multiple sclerosis symptoms may also include:

When Should You See A Doctor For Multiple Sclerosis

If you have a few of the abovementioned signs and symptoms, you must get diagnosed with multiple sclerosis. There is no permanent cure for this disorder. An early diagnosis and treatment can aid in fast recovery from immune attacks, alter the course and control the symptoms.

There are no specific diagnostic tests for Multiple Sclerosis. Meanwhile, a diagnosis often depends upon ruling out other conditions. Your doctor my probably start with a thorough examination and medical history. Your doctor may then suggest:

Blood tests: to exclude other diseases with symptoms similar to Multiple Sclerosis.

Spinal tap (lumbar puncture): in which a small cerebrospinal fluid’s sample is removed as it can show in antibodies that are linked to Multiple Sclerosis and rule out other conditions.

MRI: which many reveal areas of Multiple Sclerosis (lesions) on your spinal cord and brain.

Evoked potential tests: in which an electrical signals produced by your nervous system are record in response to stimuli.

Multiple sclerosis cannot be cured. The treatments get done to reduce the symptoms and slow down the progression of the disease. Also, mild symptoms do not need any treatment.

To treat attacks, the doctor may suggest corticosteroids or plasma exchange. Corticosteroids involve oral and intravenous medications. Plasma exchange is also known as plasmapheresis. In this method, plasma are removed from the blood cells. These blood cells are then  mixed with albumin before putting it back into the body.

The type of treatment to opt for depends upon the stage, and your doctor may suggest the best option as per your stage or type of MS.

The life expectancy of patients with multiple sclerosis has improved over the years. It has happened due to novel treatment approaches, better healthcare facilities, and lifestyle changes. It can even turn out to be life-threatening. Although, this happens very rarely.

Who is at risk of multiple sclerosis?

What complications may arise along with multiple sclerosis?

Complications like depression, paralysis of legs, epilepsy, muscle spasms, mood swings, and problems with bladder, bowel and sexual function may arise due to multiple sclerosis.

Multiple sclerosis does not have a permanent cure, but the symptoms and problems arising may be managed by early diagnosis and proper treatment.

Verified By Apollo Neurologist
https://www.askapollo.com/physical-appointment/neurologist
The content is medically reviewed and verified by highly qualified Neurologists who bring extensive experience as well as their perspective from years of clinical practice, research and patient care
Facebook
Twitter
WhatsApp
Linkedin
Previous articlePregnancy Exercise: Do’s and Dont’s
Next articleTypes of Menstrual Cups and which one to choose
RELATED ARTICLES
Cardiology