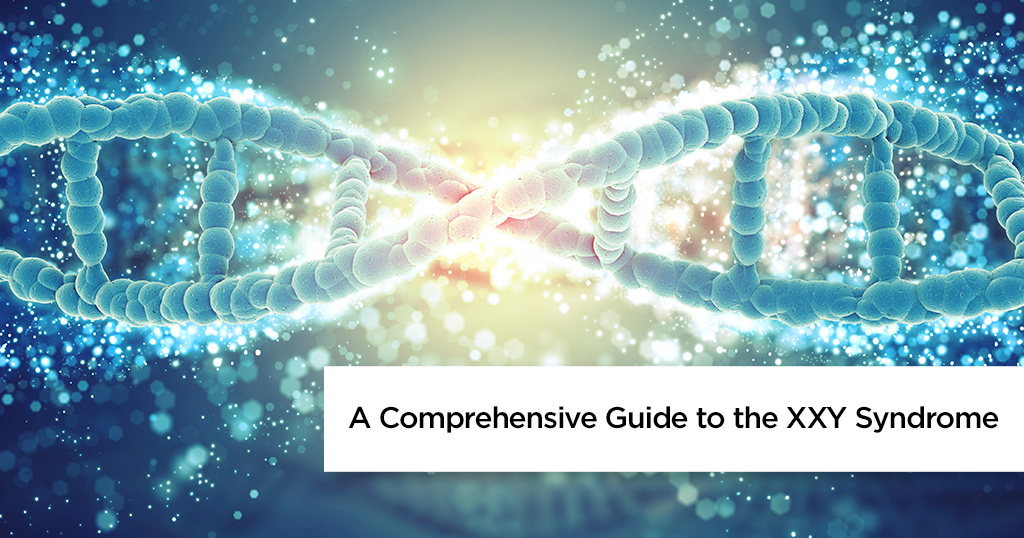 Chromosomes are responsible for carrying our genetic information and are present within every cell in our body. The ‘sex chromosomes’, either ‘X’ or ‘Y’, are a pair of chromosomes that denotes a baby’s genetic sex. A female fetus carries two X chromosomes (XX), while a male carries one X chromosome and one Y chromosome (XY). Occasionally, a male child is born with an extra X chromosome known as Klinefelter Syndrome or XXY syndrome.

XXY Syndrome at a Glance

While the XXY syndrome does have physical manifestations, they are varied and inconsistent. Consequently, men who have the condition do not realise until they reach adulthood and have low sperm count when they are trying for a baby. XXY syndrome is a relatively common condition, and around 1 in 660 males tend to have it.

A male fetus typically ends up having an XXY chromosome due to either the ova or the sperm containing an extra X chromosome. Statistically more probability of XXY syndrome is observed in male babies delivered by an older mother approaching menopause.

XXY syndrome is manifested in a male in three different forms:

While most males with XXY syndrome are diagnosed in adulthood, multiple symptoms are indicating the condition across various stages of maturity. Current diagnosis is made on the extent of these symptoms:

Based on age, the symptoms of XXY syndrome vary as illustrated below:

1. Symptoms Of XXY Syndrome in Babies-

2. Symptoms of XXY Syndrome in Children and Adolescents-

3. Symptoms of XXY Syndrome in Adults:

Due to the physical manifestations of XXY syndrome, as well as the stunted behavioral, learning, and motor development, patients are susceptible to psychiatric health issues such as anxiety, depression, and low self-esteem and occasionally with an autism spectrum disorder.

Infertility and other issues debilitating healthy sexual function are an anticipated complication.

Other probable complications of XXY syndrome include:

Diagnosis and Treatment of XXY Syndrome

The treatment for XXY syndrome is preceded by two diagnostic tests: chromosome analysis and a hormone test. While XXY syndrome cannot be ‘cured’, there are various avenues to treat the symptoms, thereby keeping the disease under control.

XXY syndrome is a random genetic event that could occur during fertilisation, and there are no precautions that one can take to prevent it. Statistically, if the mother is older than 35, the male child bears a higher possibility of having XXY syndrome. It cannot be directly inherited from either of the parents since it is caused by an extra X chromosome (which is present in both the male sperm (XY) and female ova (XX).

How is the Klinefelter syndrome diagnosed?

The diagnosis of Klinefelter syndrome begins with a physical examination of the chest, testicles, penis, etc. Other typical symptoms of the disease are also discussed during the check-up. The session may also include checking your reflexes to gauge motor development. The doctor would then prescribe blood tests for Chromosome analysis and hormone tests to confirm the disorder.

What is the life expectancy of a person with Klinefelter syndrome?

Klinefelter syndrome is not a terminal disease and does not reduce life expectancy. According to research, the associated disorders, such as cardiovascular and lung impairments, may reduce the male’s lifespan by a couple of years than the average.

Are all men with Klinefelter’s infertile?

Not all men with XXY syndrome are infertile. While, in some cases, the male produces no sperm or a very low sperm count. Fertility treatments such as ICSI can allow a man with low sperm count to have children.

What is the most common treatment for Klinefelter’s?

The most common treatment for Klinefelter’s is Testosterone Replacement Therapy. This treatment can be started right after puberty and must be continued at regular intervals through the patient’s lifespan. Testosterone replacement therapy will help accentuate the stereotypically male features, such as muscle tone, facial and body hair, and a deeper voice, which is suppressed due to the extra X chromosome.

Who is most likely to get Klinefelter syndrome?

XXY syndrome in a male child is a random genetic event, and cannot be traced back to any specific catalyst. However, the risk of the fetus having an extra X chromosome does statistically increase if the mother is over 35 years.