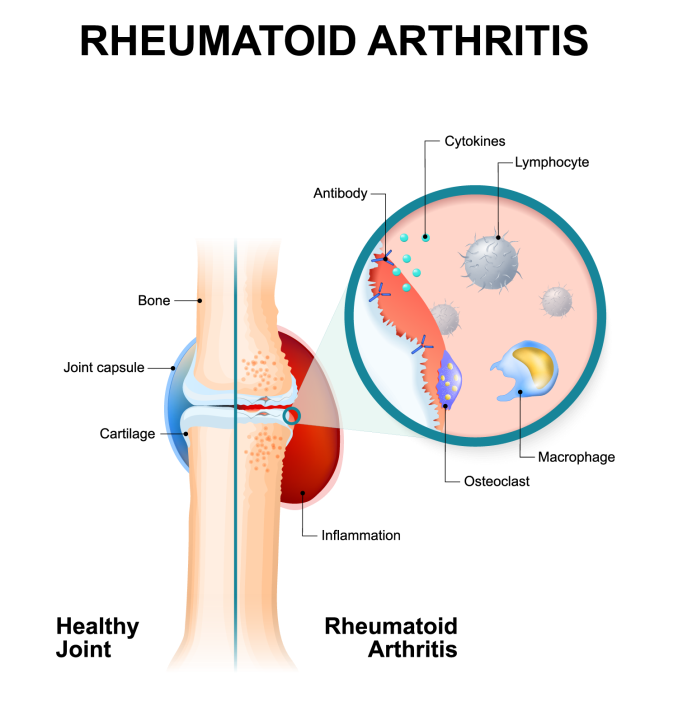 The prevalence of osteoarthritis (OA) rises with age and as the world’s population continues to age, it is estimated that degenerative joint disorders such as osteoarthritis will impact at least 130 million individuals around the globe by the year 2050. Fifteen percent of individuals over the age of 60 are believed to suffer from this disorder. Women are more prone to osteoarthritis than men.

Osteoarthritis is thought to be the most prevalent of all musculoskeletal pathologies, affecting an estimated 10 percent of the world’s population over the age of sixty. Osteoarthritis ranks fifth among all forms of disability worldwide. Women are more prone to osteoarthritis than men. One in twenty men and one in twelve women will develop an inflammatory autoimmune rheumatic disease during their lifetime.

It is the most common type of arthritis. It is most often seen in adults over 40s or older. It is more common in women and people with family history of this disorder. However, it can occur at any age, due to injury or due to any other joint-related conditions, such as rheumatoid arthritis or gout. In osteoarthritis, the smooth cartilage lining of the joint is primarily affected. Due to which movement becomes more difficult leading to pain and stiffness. Once the cartilage lining begins to thin out and roughen, the tendons and ligaments need to work harder. Due to which swelling and the formation of bony spurs occur. Severe damage to cartilage leads to bone rubbing on bone, changing the shape of the joint and making the bones out of their normal position. The most commonly affected joints are spine, hands, hips and knees.

It usually starts when a person is between the ages of 40 and 50 years. Women are three times more prone than men. Rheumatoid and osteoarthritis are entirely two different disorders. Rheumatoid arthritis happens when the body’s immune system targets affected joints causing pain and swelling. The outer covering (synovium) of the joint is affected first. Then the disease spreads across the joint, leading to further swelling & change in the joint’s shape. This causes cartilage and the bone to break down. The tissues and organs in the body are also affected by rheumatoid arthritis

Other types of arthritis and related conditions

RA and SLE are due to immune system dysfunction. Genetic markers increase the risk of developing RA.

Most types of arthritis are a result of a combination of factors. Some people are genetically more prone to certain arthritic conditions. Additional factors like infection, smoking, previous injuries and physically demanding occupations, interact with genes to increase the risk of arthritis.

Diet and nutrition play a very important role in the treatment of arthritis. Foods which increase inflammation like refined sugar and animal-derived foods can make symptoms worse.

Gout is a type of arthritis which is linked to diet and is caused by elevated levels of uric acid. High-purine foods like red wine, seafood and meat, increase the gout symptoms.

Arthritis limits the functions of the affected joints. Arthritis causes joint inflammation and results in swelling, joint stiffness, pain, redness, and warmth. The inflamed joint can be tender with or without pain. When large joints like knee joints are involved, there is a limitation of movement due to cartilage loss and joint damage. When smaller joints in the fingers are affected by arthritis, there will be loss of strength of hand grip.

Rheumatic disease is not limited to the joints. It can affect various other organs of the body. Symptoms can include gland swelling (swollen lymph nodes), fever, fatigue, weight loss, feeling unwell, and abnormalities of organs like the heart, lungs,  or kidneys.

Certain risk factors have been linked with arthritis. Some of these are modifiable while others are not.

During a physical examination, the doctor examines all joints for pain, redness, swelling, warmth and movements. Depending on the type of arthritis suspected by the doctor, the following tests may be suggested.

The analysis of body fluids helps pinpoint the type of arthritis you may have. Fluids commonly analyzed include blood, urine and joint fluid. To obtain a sample of your joint fluid, your doctor will cleanse and numb the area before inserting a needle in your joint space to withdraw some fluid (aspiration).

These types of tests detect problems within the joint which cause the symptoms. Examples include:

X-rays are used to see bone, cartilage loss, bone spurs and bone damage. X-rays do not detect early arthritic damage, but help to see the progress of the disease.

Computerized tomography (CT) scan takes X-rays from various angles and combines them to produce cross-sectional views of internal structures. In CTs both bone and the surrounding soft tissues are noted.

Ultrasound is used to produce images of cartilage, soft tissues, and fluid-filled structures like bursae. Needle placement for joint aspirations and injections can also be guided by ultrasound.

Physical therapy is useful for many types of arthritis. Exercises are used to improve the range of motion and strengthen the muscles that surround the joints. In some cases, splints or braces may be necessary.

If conservative measures don’t show any improvement the doctor would suggest surgery.

Arthritis by is inflammation of one, two or more joints and cause pain and swelling.

What are the Treatment Options for Penis Enlargement?

Marketers frequently advertise, and even claim that you can increase your penis size with the aid of pills, lotions, vacuum devices, and...
Read more
Arthritis

Could My Knee Pain be Arthritis?

Introduction Arthritis of the knee is one of the most common causes of knee pain. Along with pain, one...
Read more
Arthritis

Spondyloarthritis comprises of a group of conditions where the arthritis occurs in joints of the spine as well as peripheral joints. Patients...
Read more

Introduction There is a saying that goes, “Health is wealth.” Maintaining a healthy lifestyle has become more important to...
Read more
Load more
×