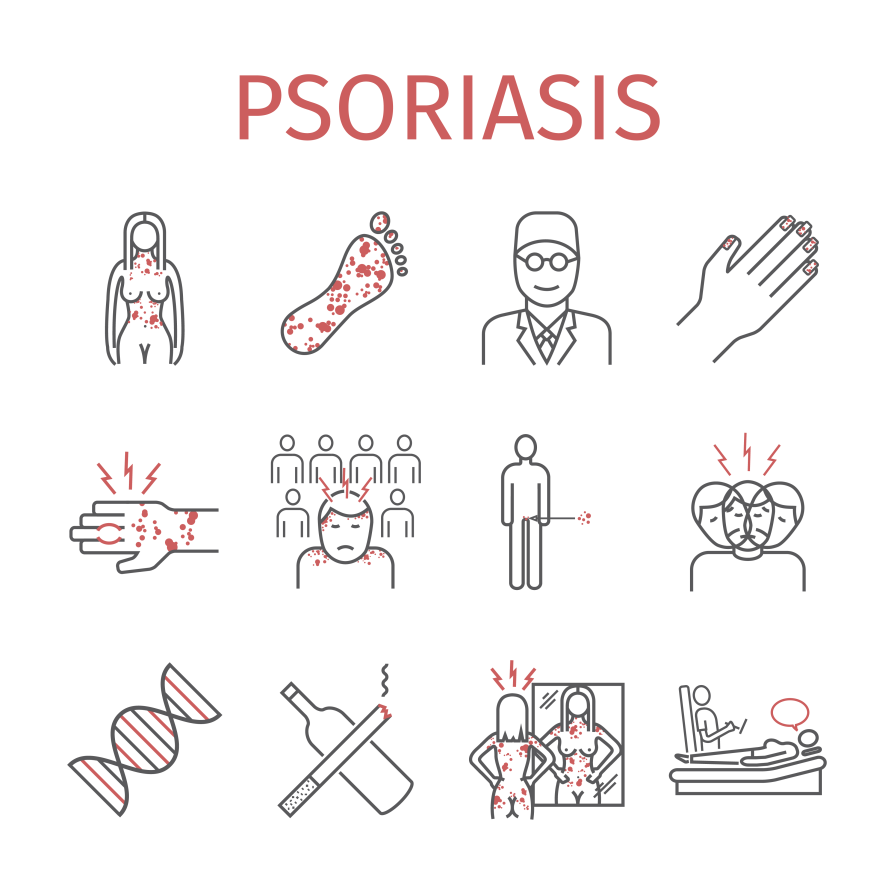 Psoriasis is a skin condition that causes the formation of scales and red patches on the skin.

The word psoriasis is derived from Greek words psora and iasis which can be translated as “itch” and “condition” respectively and can be termed as “itching condition” or “being itchy.”The scales and patches formed due to psoriasis are itchy and painful.

Psoriasis is a chronic disease that often shows up and fades away in a repetitive manner. This condition is caused due to rapid cell build up on the surface of the skin. The severity of psoriasis could range from small patches to full body coverage.

Psoriasis can be categorized into five main types. They are:

Plaque psoriasis: This type of psoriasis constitutes to about 90% of the cases. It is characterized by red patches with white scales on the top. This is also called as psoriasis vulgaris. It commonly affects the back of forearms, navel area, scalp and shins. They are also known to occur around the genitals and also on the soft tissue inside the mouth.

This type comes with spots which are small and separate and in the shape of a drop. They affect the body, limbs, face and head.

This type is characterized by the formation of red patches in the folds of the skin. It is also called as flexural psoariasis.

This type of psoriasis forms blisters which are usually filled with pus. The blisters are small and affect hands and feet. The patients may also have accompanying flu-like symptoms.

This can develop from any of the other types of psoriasis. It occurs when the rash becomes widespread, red and scaly. It is a serious form which requires hospitalization.

This type involves fingernails and toenails and causes pits and changes in the nail color. Most people experience nail psoriasis at some point in life.

A combination of genetic and environmental factors is known to cause psoriasis. It could occur at any age but is known to commonly appear for the first time between 15 to 25 years of age. The numbers of cases reported are higher in regions that are far from the equator. While the condition is relatively uncommon in African Americans, it is seen to be very common in people with European ancestry. Individuals with irritable bowel syndrome ulcerative colitis and Crohn’s disease are more vulnerable to psoriasis.

Most patients with psoriasis suffer mild symptoms like mild-skin lesions that can be treated easily and effectively with the use of topical therapies. For cases that range from moderate to severe, the patient may be subject to phototherapy, diet restrictions and other treatment procedures.

A number of theories exist on the causes of psoriasis through the precise causes are not fully understood. Factors like the following are believed to play a role in causing psoriasis:

Genetic Causes: Nearly one-third of patients suffering from psoriasis have acquired the disease genetically. In cases of identical twins where one twin suffers from the condition, the other twin has about 70% chances of displaying symptoms of the disorder sooner in life. The same is reduced to 20% in case of non-identical twins.

Lifestyle: Factors like stress, the presence of infections, changes in the environment, etc. might worsen psoriasis. Excessive alcohol consumption, obesity, cigarette smoking, dryness of skin, exposure to hot water are known to worsen the condition.

HIV: Individuals who are HIV-positive are at a higher risk of being affected with psoriasis. The symptoms also tend to be more severe in these individuals. They are also prone to be affected by psoriatic arthritis.

Microbes: Staphylococcus aureus, Malassezia and Candida albicans can increase the tendency for psoariasis.

Psoriasis is characterized by an abnormal growth of the outer layer of the skin. An overabundance of skin cells and abnormal production of cells during wound repair usually results in psoriasis. The usual time taken for skin-cell replacement is 28 – 30 days. But in the case of psoriasis, skin gets replaced every 3 to 5 days. Premature maturation of keratinocytes is believed to be a reason for this rapid growth.

Apart from other causes, there are a number of factors that trigger psoriasis. Some of the common trigger factors include skin injuries, stress, tension, cold temperatures, a weakened immune system, cuts on the body, bug bite, sunburn, and autoimmune disorders. Triggers can be identified potentially by keeping a track of symptoms and when they occur.

Symptoms of psoriasis vary from type to type. Each type of psoriasis displays a unique set of symptoms which are in a way characterized by skin lesions, flakes and itchiness.

Common symptoms of psoriasis include:

Symptoms of different types of psoriasis are as follows:

The risk of being affected with psoriasis is higher for some individuals. The risk depends on the following factors.

The diagnosis of psoriasis is usually done through two methods. They are:

Treatment of psoriasis can be divided into four main types. They are topical treatments, light therapy medication and alternative medicine.

For patients with mild to moderate disease, topical application of creams and ointments can effectively treat the condition. For severe cases, this is used in combination with oral medicines or light therapy.

Use of oral and injected medication is necessary if a person has severe psoriasis or if he is resistant to other treatment types. This type of treatment is also called systemic treatment. Drugs like retinoids, methotrexate, cyclosporine, and other drugs that alter the immune system are used in treating psoriasis.

Apart from generic medicines that treat psoriasis, there are several alternative therapies that are proven to reduce symptoms of psoriasis. Such alterations include special diets, use of dietary supplements, herbs and creams. These treatments are not as effective as other treatment procedures but are considered safe for long-term usage. They are believed to ease symptoms like itching, scaling and pain. This treatment could be the best choice for patients with mild psoriasis.

Remedies like usage of aloe-vera, fish oil and Oregon grape are also well-known in treating psoriasis. Application of aloe-vera cream has shown to reduce scaling, itching and inflammation. This can be used on a repetitive basis and as required by the patient to see significant improvement. Omega -3 fatty acids that are found in fish oil also reduce inflammation associated with psoriasis. Topical application of Oregon grape which is also known as barberry has also shown to reduce inflammation and ease a psoriatic condition.

The measures that could aid in the prevention of psoriasis include –

No. Psoriasis cannot be passed by touching a skin lesion.

How can someone get psoriasis?

A person can develop psoriasis when his immune system sends wrong signals that lead to increases in skin cell production. The excessive cells pile up on the surface of the skin, leading to scaly patches that are itchy and painful.

What kind of creams can be used to treat psoriasis?

Thick lotions and creams that seal the moisture are good for psoriasis treatment. Application of petroleum jelly, olive oil and other thick substances which keep the skin moist often help in treatment.

Apollo Hospitals has the Best Dermatologist in India. To find the best doctors in your nearby city, visit the links below: