All About Squamous-cell Cancer 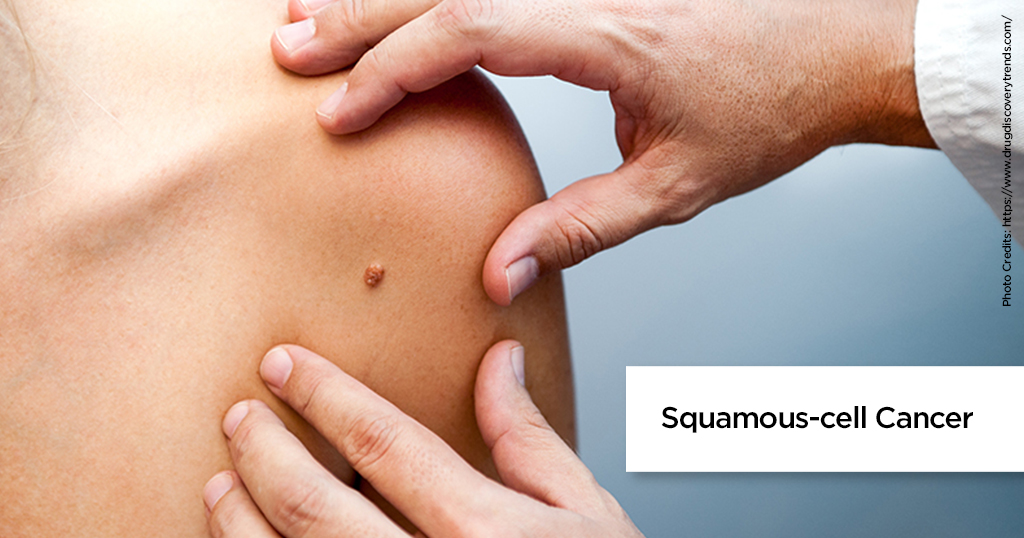 1. Non-melanoma that include squamous cell cancer and basal cell carcinoma

2. Melanoma, that leads to uncontrolled growth of melanocytes , the cells that produce Melanin, a dark pigment primarily responsible for skin color.

What is Squamous-cell Cancer?

Squamous cells are flat cells in the outer (upper) part of the epidermis that constantly shed as new ones are formed. When these cells grow out of control, they develop into squamous cell cancer or carcinoma.

Squamous-cell cancer is the second most common type of skin cancer. In comparison to basal-cell cancer (carcinoma), it is less common but more dangerous. It appears as a thick, red and scaly spot, which may bleed easily, crust or ulcerate. This disease needs attention immediately, if left untreated, it will spread to other parts of the body.

Signs and symptoms of squamous-cell Cancer

2. In early stages, it appears as a scaly, crusted and large reddish patch.

3. In later stages, it becomes prominent and looks like a growing bump, having rough, scaly surface as well as a flat reddish patch.

4. On the lip region, the tumour takes the shape of a small ulcer, which does not heal and bleeds from time to time.

Factors that can put you at risk of squamous-cell cancer

1. Ultraviolet rays of the sun

5. In terms of gender, men are at greater risk. And in terms of age, older people are more likely to develop this type of skin cancer .

Tests and diagnosis for squamous-cell carcinoma

Typically, a skin biopsy is performed, wherein a piece of skin is removed and is sent to the laboratory to detect the presence of cancerous cells.

The treatment depends on the size and location of the skin lesion; in addition to its location. Treatment includes:

1. The best mantra for prevention is reduced exposure to sunlight, especially during 10 am to 4 pm when the rays are most intense.

2. One should use sunscreen half an hour before going outside and apply it frequently, thereafter

3. One should avoid surfaces that reflect light

4. The risk is higher during the start of the summer