HomeGastro CarePeptic Ulcers, and What Action Can Be Taken To Prevent Them from...
Gastro CareHealth A-Z

Peptic Ulcers, and What Action Can Be Taken To Prevent Them from Worsening 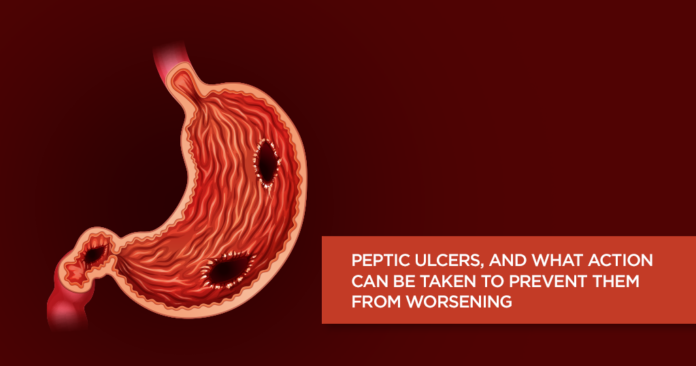 When your stomach acids eat away the digestive tract’s protective layer of mucus, you develop a peptic ulcer. It looks like an open sore on the inner lining of the stomach. In some cases, peptic ulcer leads to bleeding inside the stomach – which may need blood transfusions.

You can develop two types of peptic ulcers

● Gastric ulcer – It appears on the stomach lining.

A peptic ulcer can occur at any age, though developing it increases as you grow older.

You will feel discomfort or a burning sensation in your stomach during the night or in between meals. The pain may reduce when you eat food or take an antacid, but will return.

A mild ulcer may not cause any symptoms. But, if the symptoms start getting worse, it is best to consult a doctor.

If not treated on time, peptic ulcers can cause several complications such as:

Peptic ulcers can perforate the wall of your stomach and small intestine. This can lead to severe infections of the abdominal cavity.

Peptic ulcers can block the digestive tract, causing you to feel full easily, to vomit, or to lose weight, without any possible explanation.

● Medications: One of the most common risk factors for peptic ulcers is non-steroidal anti-inflammatory drugs (NSAIDs). Taking medications such as aspirin, ibuprofen, naproxen sodium, and ketoprofen over a prolonged period increases peptic ulcers’ risk.

● Helicobacter pylori bacteria are commonly found in the mucous lining of the stomach and small intestine. This lining covers and protects the tissues in the digestive tract. Typically, the bacteria cause no harm to the stomach. But in some cases, it can cause inflammation in the inner lining, which results in an ulcer.

● Consuming alcohol: It can irritate the mucus lining in the stomach leading to the increased production of the stomach acid.

● Smoking: People who are infected with the H. pylori bacteria may be at a higher risk of developing peptic ulcers if they smoke as well.

How is a Peptic Ulcer diagnosed?

Some methods of diagnosing a peptic ulcer are:

● Upper Gastrointestinal Endoscopy: To examine your upper digestive system, the doctor will use an endoscope. It is a hollow tube fitted with a small lens. The endoscope will be run down through your throat and into the other parts of the digestive system. The doctor will look for ulcers with the endoscope. If an ulcer is detected, a small sample will be removed from it and taken to the laboratory for further tests (biopsy). With the biopsy test, the doctor can also identify the presence of H. pylori in your stomach lining.

The treatment of peptic ulcers depends on its cause.

The production of stomach acid is reduced by using PPIs – proton pump inhibitors. These inhibitors block the action of the part of the cells that produce acid in the stomach.

Using the proton pump inhibitors at high doses for a long time may increase the risk of developing spine, wrist, and hip fractures. Consulting a doctor or physician before taking any medication is recommended.

Antacids help neutralize stomach acid and provide rapid pain relief. Diarrhea or constipation are some of the side effects of taking antacids. This medication does not heal the stomach ulcer but may provide some symptom relief.

Upon diagnosis, if the bacteria is found in your digestive tract, the doctor may prescribe a combination of antibiotics to kill it. The combination may include metronidazole, levofloxacin, tinidazole, clarithromycin, tetracycline, and amoxicillin.

Histamine (H-2) blockers, also known as acid blockers, reduce the amount of acid produced in the stomach. It relieves the pain caused due to ulceration and helps in the healing process. The medication includes cimetidine nizatidine and famotidine.

There is a chance of reducing the risk of developing peptic ulcers by taking the following precautions:

● Keeping away from infections

There is no evidence on how the H. pylori bacteria spreads, but some studies show that it is transmitted through food or water and person to person. It is advised to frequently wash your hands, especially before and after your meals.

Regularly taking pain relievers put you at high risk for stomach problems. You can avoid these problems by taking your medications with meals. Consult with your doctor on how you can take the lowest dose of the pain relievers that will still give you pain relief.

● What to do if you think you have an ulcer?

When you start to notice an ulcer’s symptoms, consult a doctor before taking any medications on your own. A doctor may be able to assess the condition properly and prescribe the best medication for your ulcer.

● How do you heal an ulcer naturally?

Having bland foods like buttermilk, yogurt, honey, fruits, vegetables, soybeans, garlic, and whole grains may ease the symptoms. However, it is always best to seek medical help.

Facebook
Twitter
WhatsApp
Linkedin
Previous articleTypes of color blindness and how to check for it?
Next articleHyponatremia: Associated Facts
RELATED ARTICLES
Cardiology

What is Heartburn or Gastroesophageal Reflux (GER)?