All about Penile Cancer 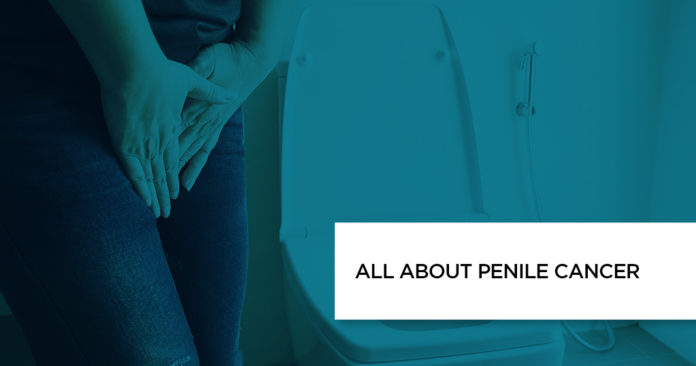 What is Penile Cancer?

The malignant growth found in the tissues or in the skin of penis, the male sexual organ, is known as penile cancer.

Penile cancers usually develops in men over 60 years of age. Other risk factors include HPV infection , HIV infection , being uncircumcised , as well as conditions like phimosis [ inability to retract foreskin] and accumulation of secretions called smegma under the foreskin, that occur in uncircumcised individuals..

Common types of penile cancer are:

The exact cause of penile cancer is unknown. However the risk factors include the following:

· Smoking: Men who smoke or chew tobacco are at the risk of developing penile cancer.

· Human Papilloma Virus (HPV): HPV 16 and HPV 18 are found to be linked to penile cancer. HPV is a sexually transmitted virus.

· Phimosis: It is a condition characterized by inability or difficulty to pull back the foreskin of the penis. Smegma gets accumulated underneath the skin. Smegma is a cheese like foul smelling substance and comprises of body oils, other debris and bacteria. It increases the risk of penile cancer. About 25-27% of penile cancer cases caused due to phimosis.

· Uncircumcised males are more prone to developing cancer of the penis. Circumcision lowers the risk of having penile cancer.

· It is seen that low rates of circumcision at birth and lack or hygiene are important contributing factors of penile cancer.

Signs and symptoms of Penile Cancer

Penile cancer begins from the tip of the penis (glans penis) and spreads to the other parts of penis. You should consult a doctor, if following symptoms are present:

· Reddish rash on the penis

· Persistent foul discharge under the foreskin

· Pain and bleeding from the penis (in advanced cases)

The diagnosis involves a thorough physical examination of the penis and the surrounding region. The examination may reveal a non-tender lesion resembling a pimple or a wart. It is generally located near the end of penis.

A biopsy is required to confirm the ailment.

If detected at the early stages, the prognosis is quite good. A quick diagnosis followed by proper treatment assures speedy recovery.

Treatment for penile cancer depends on the size and location of the lesion. Penile cancer treatment includes the following:

a) Chemotherapy: Here medicines are employed to destroy cancer cells.

b) Radiation: Here x-rays are used to destroy cancer cells.

c) Surgery: Surgical techniques are used to excise or remove the malignant lesion. Surgery can be in the form of partial penectomy, total penectomy or urethrostomy:

· Partial penectomy is removal of the cancerous part of the penis, only. It is generally done when the cancer is situated near the tip of the penis.

· Total penectomy is the complete removal of the penis. It is done in severe cases or in advanced stages of cancer.

· Urethrostomy is done to create a separate opening for passing urine

Radiation therapy and Chemotherepy may be done in combination with surgery.

Chemotherapy may also be done along with surgery.

d) Cryotherapy: This technique uses a cold probe for freezing and killing the cancerous cells.

e) Some low-grade, very early-stage penile cancers, especially carcinoma in situ (CIS, in which the cancer is only in the top layers of the skin) can be treated with techniques other than an operation. These treatments include cryotherapy, laser ablation, radiation therapy and putting medicines right on the skin of the penis to kill the cancer cells (called topical therapy). These treatments may be called penile sparing techniques.