Why is it important to get whooping cough treated quickly? 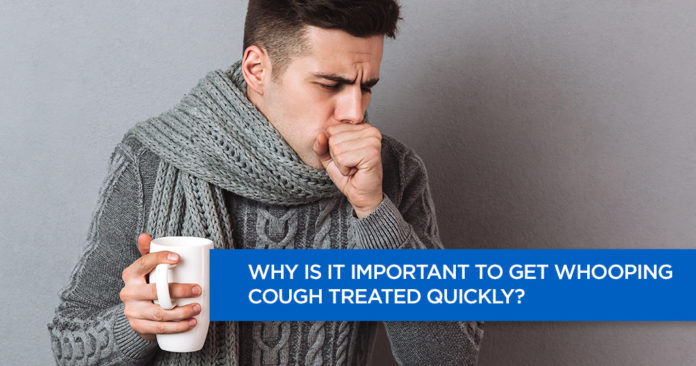 Whooping cough, also known as Pertussis, is a respiratory infection in humans that is mainly caused by a bacteria called Bordetella Pertussis. It is a highly communicable disease, and the main source of infection to others is by droplet route (when an infected person sneezes or coughs, the germs spread via air and infect others). Earlier, whooping cough was called a childhood disease, but now it has been found that the disease can affect people of any age from infants to old age.

Even though death due to Whooping cough is rare but mostly occurs in neonatal ages due to respiratory failure. So it is always recommended to get your child a full course of DPT vaccination (diphtheria, Pertussis, and Tetanus) which helps to provide immunity against diseases.

Signs and Symptoms Of Whooping Cough

Whooping cough can mimic the symptoms of any other respiratory illnesses, but some differentiating factors make it unique from others. To differentiate the disease, it is important to gather a detailed history of the patient by assessing the signs/symptoms and observing physical findings. In some patients, a Whooping sound may not always be present, but a sound of hacking cough is often present.

In infants, the symptoms may appear differently as there might be no evidence of coughing, but there will be signs of shortness of breath or even a catch (sudden stoppage of breathing).

When should you consult a Doctor

You should see your doctor when the fever doesn’t subside; prolonged coughing exists with difficulty in breathing, bluish discoloration of the skin, multiple episodes of vomiting, seizures, etc.

Whooping cough can be highly fatal in infants below six months of age and toddlers and are needed to provide urgent medical care or even need ICU admission. The chances of Whooping cough during pregnancy are quite frequent and can result in life-threatening complications and even death of babies.

Initially, the disease may present with mild symptoms of flu, cold or bronchitis. But your doctor may able to find the cause of your disease by performing some lab tests and investigation such as:

Culture of the organism: Your doctor will take a sample from the throat or nose. The sample is then cultured into the lab to find the bacteria. The appearance of Bordetella Pertussis is a confirmatory finding of the disease.

Blood test: Your doctor will take a sample of your blood to find any signs of systemic infections. Usually, a rise in WBC (white blood cell) count signifies a presence of infection.

Chest X-ray: A chest X-ray of lungs Your doctor will take a sample is done to identify the signs of Pneumonia or any accumulation of fluids within the lungs.

To prevent yourself or your child from Whooping cough, it is always necessary to get DPT vaccination ( diphtheria, Pertussis, and Tetanus). Infants who are below 12 months of age and haven’t been vaccinated yet, need to get a shot of DPT vaccination as the risk of complications and death are higher in them.

Children must be vaccinated with the DPT vaccine in the following months:

The immunity from the vaccine will be useful until 11 years of age. So for adults, it is recommended to get a booster shot to protect themselves against diphtheria, Tetanus, and Pertussis, which not only helps in building up your immunity but also helps in stopping the transmission of the disease. For Pregnant Women, itis recommended getting vaccinated at 27-36 weeks of gestation, which helps provide your unborn child immunity for the disease.

Treatment for Whooping Cough is usually done by using Broad Spectrum of Antibiotics. Still, if the disease duration is long, the only use of antibiotics won’t help in resolving the disease. Pertussis can be very dangerous in children and may need hospital admission and include oxygen supplementation, ICU admission, and even Ventilation support. Do not use any cough expectorants or suppressants as it may complicate the disease more. Always get yourself checked through by a professional health worker and then have your medicines as per the medical advice.

Here are some easy precautions to take while at home:

The content is medically reviewed and verified by experienced and skilled ENT (Ear Nose Throat) Specialists for clinical accuracy.

Facebook
Twitter
WhatsApp
Linkedin
Previous articleRule Out Heart Palpitations Before They Lead to Other Cardiac Complications
Next articleWhat is TrueNat Test and How Does It Work?
RELATED ARTICLES
ENT

How to manage ears with Otosclerosis