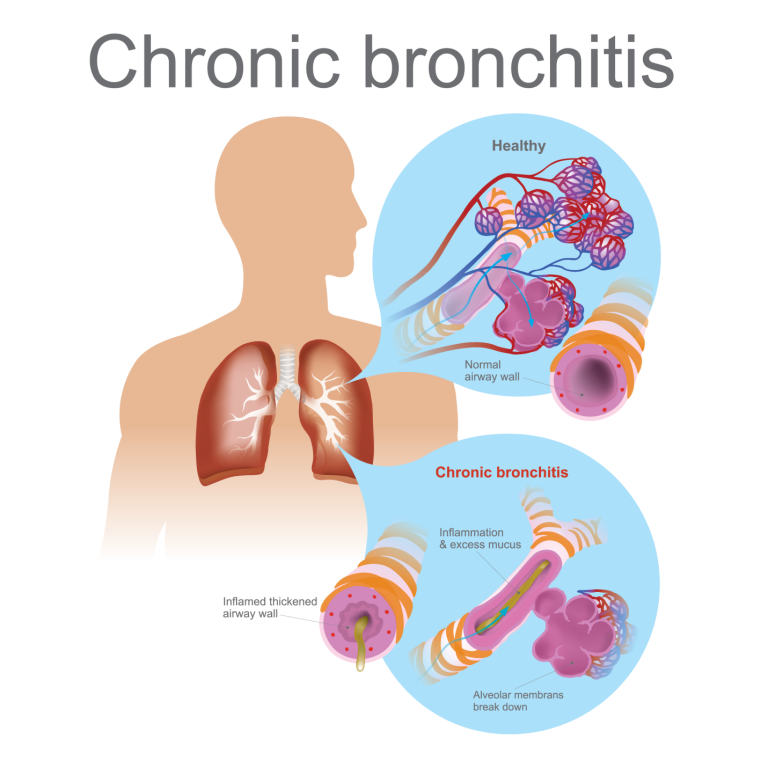 Bronchitis occurs when the inflammation of the lining of the bronchioles of the lung occurs (bronchioles are air tubes in the lung). It is commonly referred to as “chest cold.”

The windpipe (trachea) branches off into the left main and right main bronchus. These bronchi lead into much smaller airways known as the bronchioles. The walls of these bronchioles trap dust and other particles that may irritate the lung. These bronchioles produce excess mucus when they are inflamed or irritated. A cough helps in removing this secreted mucus in the lungs.

Bronchitis is a condition between pneumonia and cold. Bronchitis is a severe form of the disease, but it is not as severe as pneumonia. Often the symptom is a  cough with thickened mucus production. The mucus can be discolored or pinkish (if bleeding is present due to a persistent cough). Other symptoms are wheezing during breathing, fever, and fatigue.

Bronchitis is basically of two types

If a cough lasts for more than five days then it is acute bronchitis. It is commonly seen in young children below five years of age and often develops in winter following a common cold, flu or a sore throat.

Viral infections also cause bronchitis. These are common chest cold infection that may improve within three weeks, and cough is persistent for a prolonged period. The inflammation of the bronchioles and the cough are usually related to smoking, exposure to dust and irritating chemicals.

It is due to constant irritation of the bronchioles of the lung. It is caused by underlying infections or exposure to tobacco smoke or other irritating substances such as dust, smoke, chemicals or toxins present in the air. A cough produces thickened mucus and sputum. They are recurring bouts of a cough that are persistent for 2-3 months every year for at least two years. It is included in COPD (chronic obstructive pulmonary disease).disease).

Acute bronchitis in children may have symptoms of

Acute bronchitis is contagious (spreads from one person to another) when a virus or bacterium causes it. It can also be caused by cigarette smoking (chronic), exposure to irritating chemicals, air pollution (exposure to dust) and inhalation of illicit drugs. It can be diagnosed by the history given by the patient, physical examination, and possibly tests or procedures.

Symptoms of bronchitis can be relieved by medications such as cough suppressants, acetaminophen, NSAIDs and antibiotics (in bacterial infections only).

The most common causes of bronchitis are:

Those viruses that cause flu and common colds can also cause bronchitis. When we sneeze or a cough, millions of tiny droplets are released from the mouth or nose. These tiny droplets contain millions of viruses in them. These droplets hang in the air for a while and spread about 3 feet (1 meter). Then the virus lands on the surface and survives for up to 24 hours. If anyone touches this surface, the virus can spread, causing viral infections.

Irritant substances such as chemicals in household products, smog or tobacco smoke can trigger bronchitis. Chronic bronchitis is mostly caused by cigarette smoking. Passive smokers (people who inhale secondhand smoke), as well as people who smoke, can be affected with chronic bronchitis.

It is a smoking-related lung disease that often develops in people with chronic bronchitis. It causes shortness of breath, and the air sacs present inside the lungs become damaged. Smoking should be stopped immediately as it aggravates bronchitis and may increase your risk of developing emphysema.

If you are often exposed to materials such as chemicals, dust, and smog in your work area, then you may develop chronic bronchitis and chronic obstructive pulmonary disease (COPD). Necessary preventive measures must be taken in such cases. They are also known as “occupational bronchitis,” and the symptoms subside once you are no longer exposed to these materials.

Some materials may cause damage to your lungs such as

The signs and symptoms of bronchitis are

If you have the following symptoms, then you may have bronchitis, and you should consult your doctor immediately

Many factors may increase the risk of acute bronchitis in adults such as:

1) Smoking of Cigarette: People who are active smokers or passive smokers (living with a spouse or friend who smokes cigarettes) are at a higher risk of developing bronchitis.

2) Exposure to Irritating Chemicals (at work or outside): People working in textile or grain industries or factories that release chemical fumes are more prone to develop bronchitis. They are exposed to these irritants, and they inhale them daily. It may result in inflammation of the bronchioles.

4) Close Contact with Infected Persons: Coming in close contact with people who are sneezing,  coughing, and touching items that the infected persons had recently handled can also increase the risk of bronchitis.

5) Gastric Reflux: Irritation of your throat may result from repeated bouts of heartburn (severe). This can also cause the development of bronchitis.

6) Vaccinations: Lack of vaccinations for pneumonia, flu, and whooping cough.

7) Others: In children, various risk factors may cause acute bronchitis, such as –

The major complication of bronchitis is the risk of developing pneumonia if not treated properly. Chronic bronchitis (repeated bouts of bronchitis) results in COPD (chronic obstructive pulmonary disease).

Your physician diagnoses bronchitis by listening to your lung sounds through a stethoscope. The signs and symptoms of bronchitis can be difficult to be differentiated from the symptoms of common cold.

The following tests could be suggested by your doctor:

Most of the cases of “acute bronchitis” improve within one week to ten days without any medications because they are caused by viral infections. In these cases, antibiotics are of no use. If the symptoms of bronchitis last for more than three months, then it is known as “chronic bronchitis.”

Your physician may examine your lungs with a stethoscope to find the cause of your bronchitis. He may also ask you about your history of recent colds or viruses, and whether you have other breathing problems.

Medicines are prescribed in acute cases of bronchitis for relief.

A) Cough Syrup: Medicines such as cough syrup can suppress a cough and provide good sleep when taken at night. The MHRA (The Medicines and Healthcare Products Regulatory Agency) has recommended that cough medications must not be given to children of below six years of age. Cough syrup is used in young children only on the advice of a doctor.

Alternative treatments can be preferred to over-the-counter cough medicine. Home remedies can be helpful in such cases.

B) Steroids and Bronchodilators can “open-up” the airways. Mucolytic drugs can be used for relief as they make the mucus present in the lungs thinner.

C) Other Drugs: Inhaler is recommended if you have asthma, allergies or Chronic Obstructive Pulmonary Disease. Some medications can also be prescribed to soothe the inflammation of the lungs and to open up the narrow passages of the lungs.

Breathing exercise programs like pulmonary rehabilitation program is useful in patients with chronic bronchitis. In this, the therapist teaches you how to increase your ability to exercise your lungs and how to breathe more easily.

Your doctor may advise you to get blood tests. Blood culture tests are done to identify the underlying infections causing bronchitis.

Drink plenty of fluids for every 1 to 2 hours unless your fluid intake is restricted by your doctor. Dehydration can be prevented, enabling the mucus in your lungs to become thin, making it easier to cough up.

Drugs like acetaminophen or aspirin can be taken to relieve body aches and headaches. Paracetamol can also be taken for a headache and body pains. Medications prescribed by the doctor must be taken as per the suggestions of the doctor and on a regular basis.

Eating a healthy diet is important. It can prevent lung infections and bronchitis. Cold beverages must be avoided to prevent cold.

Antibiotics are avoided as bronchitis is usually caused by a virus. Your doctor may prescribe an antibiotic only if he suspects bacterial infection or complications such as pneumonia. Antibiotics are recommended for:

If Doxycycline or Amoxycillin is prescribed by your doctor, it is usually a five-day course. Nausea, vomiting, and diarrhea are some of the side effects that are seen but in rare cases.

Certain self-care measures can prevent bronchitis such as:

Avoid lung irritants: Lung irritants such as household cleaners or paint emit strong fumes that must be avoided. Wearing a mask may be helpful.

Humidifier: The mucus in your airways gets loosened by warm and moist air released by a humidifier. Proper maintenance of humidifier is necessary as bacteria and fungi can grow in the coolant chamber. This may also cause the spread of infections in the room.

Bronchitis can be prevented by taking the following preventive measures such as:

Bronchitis is a lower respiratory tract condition that occurs when the lining of the bronchial tubes becomes inflamed or infected. Mucus or sputum is secreted which is often discolored, and later a persistent cough may develop.

The most common cause of chronic bronchitis is smoking, which can cause constant irritation of the airways. It causes permanent damage to the lungs over a prolonged period. It can lead to a more serious breathing disorder called chronic obstructive pulmonary disease.

3) Can bronchitis cause death?

Acute bronchitis resolves within a few days. But chronic bronchitis, when not treated properly or if complications like pneumonia develop, then it may become life-threatening.

4) How long does bronchitis last?

Acute bronchitis takes 1 to 3 weeks usually to clear completely. Chronic bronchitis can persist for a few days to a few months or longer and tends to recur every year.

5) What is the difference between bronchitis and pneumonia?

The major difference between bronchitis and pneumonia is that bronchitis causes inflammation or infection of the bronchioles (air passages) while pneumonia causes accumulation of fluid in the lungs due to an underlying infection.

Apollo Hospitals has the Best Pulmonologist in India. To find the best doctors in your nearby city, visit the links below: