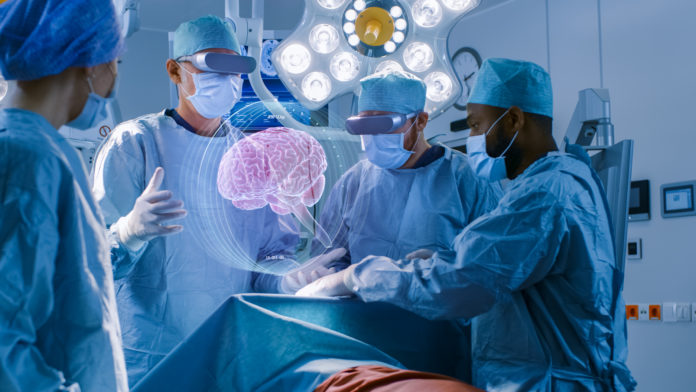 Awake brain surgery, also known as an awake craniotomy, is a type of surgery performed on the brain while you are awake and alert.

The surgery is performed to treat some brain (neurological) conditions, such as some brain tumors or epileptic seizures.

If the tumour or the region of the brain where your seizures happen (epileptic focus) is near the parts of the brain that control movements or speech you may need to be awake while undergoing the surgery. The surgeon performing the surgery may ask questions and monitor your brain activity as you respond.

Your responses may help the surgeon to ensure that he/she treats the correct area of your brain that needs surgery. In addition, the procedure may also lower the risk of damage to functional areas of your brain which could affect your movement, speech or vision. You remain conscious during the brain awake surgery, which helps the surgeon gather vital information regarding the surgery’s target. However, you would receive sedation and medications for pain relief from the anesthesiologist.

Who Qualifies for Brain Awake Surgery?

If a tumor or a section of the brain which causes seizures needs to be removed surgically, the doctors must be sure that they are not damaging an area of your brain that affects your motor skills, and speech language,.

This type of surgery would help the doctors gain feedback at the time of surgery. This ensures that none of the critical functions such as motion skills, speech, language, or other functional nerve cells of the patient are damaged. It is not always possible to accurately pin point out the brain control areas before surgery.  An awake brain surgery enables the surgeon to know the critical function areas and stay clear of them at the time of surgery.

Request an Appointment at Apollo Hospitals

Why Is an Awake Brain Surgery Performed?

Also, awake brain surgery is performed for those tumors that are spread all over the brain and do not have a border. One such tumor is glioma.

An awake brain surgery can help surgeons remove  these tumors without hampering the body functions.

For the awake brain surgery, a neurosurgeon and neuro anesthesiologist work together. During the surgery, the patient can be sedated as follows:

Sedated at the start and end of the procedure and awake in the middle of the procedure: Patient is given a small amount of anesthesia at the beginning of the surgery. The neuro anesthesiologist would stop the anesthesia when the surgeon is ready for the removal of the tumor. Post-surgery, the patient may be anesthetized again.

What to Expect Before, During, and After Awake Brain Surgery?

First, the doctor would decide if an awake brain surgery would be the right option. Awake brain surgery offers numerous advantages. People with brain tumors or seizure centers (epileptic foci) close to functional brain tissue, where surgery under general anesthesia (even with the use of latest technologies like neuronavigation, functional MRI and diffusion tensor imaging) carries a risk of producing functional deficits like paralysis of limbs or loss of speech, can consider awake brain surgery.

Awake brain surgery can help reduce the size of growing brain tumors safely, which may, in turn improve quality of life. However, the doctor would explain some of the surgery risks, including brain swelling, bleeding, transient memory loss or muscle weakness and loss of sensation of a part of body. Also, before the surgery, the doctor may ask you to identify specific pictures and words. The same questions would be asked during surgery, and the answers would be compared.

The anesthesiologist would administer medication to make you sleep in parts during your awake brain surgery.

The neurosurgeon would map your brain to avoid any damage to the nerve cells. Brain mapping and 3D images of the tumors help surgeons efficiently remove the tumor without damaging the functioning of the essential body parts. Also, the neurosurgeon may ask you the same questions during the surgery that were asked before, request you to make movements, count numbers, and identify pictures. This would help the surgeon identify the critical functional areas and stay clear of them during surgery.

Post-surgery the surgeon can order a MRI to confirm if the tumor’s removal is complete. Immediately after the surgery, you would be shifted to an ICU for some time and would need to be in hospital for a day or two.

However, you can start your regular activities and work, usually a few days after surgery. A follow-up check-up with the doctor would be recommended before resuming your normal activities.   Thus, during the surgery, the surgeon can remove most of the tumor; but there is a possibility that a few of the patients may require other treatments such as chemotherapy or radiation therapy to destroy or control the growth of the remaining parts of the tumor.

What Are the Benefits of Awake Brain Surgery?

When a patient is diagnosed with a brain tumor that controls the brain’s critical functions such as limb movements, speech, and others, awake brain surgery is the best option. It helps to identify the tumor and also preserve the individual’s functional abilities.

Damaging the nerve cells that have critical functions can lead to permanent disability. Thus, mapping the nerves during surgery is the best option to avoid further complications and disability.

What Are the Risks Associated With Awake Brain Surgery?

The neurosurgery department of the hospital performs brain awake surgery.

Awake brain surgery is suggested for patients diagnosed with gliomas located close to the functional areas of the brain.

When should one visit the doctor after the surgery?

The first follow-up session with the doctor is usually scheduled 7-10 days after the surgery. However, if you notice any of the symptoms such as fever, weakness in the legs and arms, headaches, increased swelling, and incision infection, then you should immediately consult your doctor.