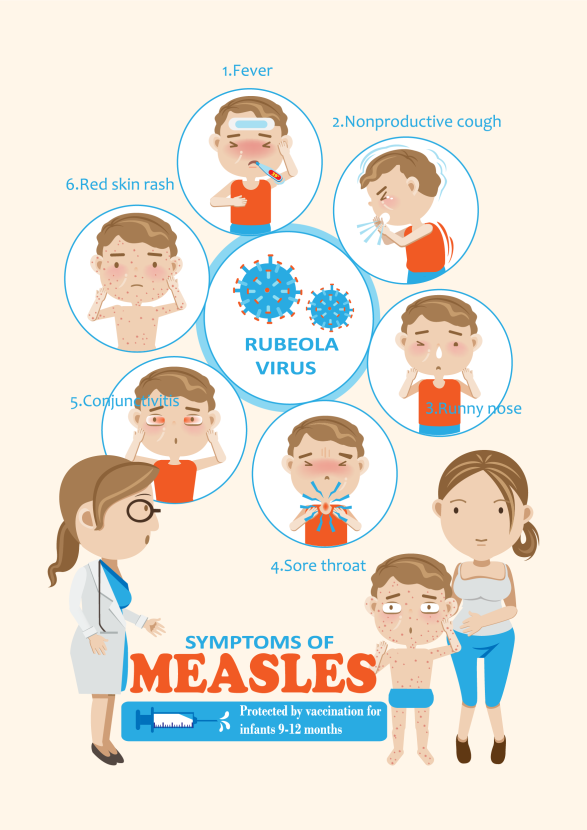 Measles or rubeola is a viral infection that affects the respiratory system. Measles is a very contagious disease can spread through contact with infected mucus or saliva. An infected person can release the infection into the atmosphere through their cough or sneeze. The measles virus can live on surfaces for several hours. When the infected particles enter the air & settle on surfaces, anyone nearby can get infected. Drinking from an infected person’s glass or sharing eating utensils with an infected person increases your risk of infection.

Measles is also a cause of death among children. Of the 114,900 global deaths related to measles in 2014, the World Health Organization (WHO) reported that the majority were below the age of 5. The number of measles cases in the US has significantly dropped in recent years due to immunizations. However, the disease has not been fully eliminated. There were 189 cases of measles in 2015, according to the Centers for Disease Control & Prevention (CDC).

If the person has any doubt of having measles, he must contact the doctor immediately. If the person has not received a measles vaccine & has contact with an infected person, visit the doctor to get measles vaccine within 72 hours of contact to prevent infection. The person can also prevent infection if immunoglobulin is taken within six days of contact with an infected person.

Measles is caused by infection with the rubeola virus. The virus lives in the mucus of the nose & throat of an infected child or adult. The disease is contagious for four days before the rash appears, & continues to be contagious for about 4 to 5 days after.

The infection spreads through:

The virus remains active on an object for two hours.

As soon as the virus enters into the body, it multiplies in the back of the throat, lungs & the lymphatic system. It later infects & replicates in the urinary tract, eyes, blood vessels, respiratory distress syndrome & central nervous system. The symptoms appear between nine & eleven days after initial infection.

Any person who has never been infected or vaccinated is likely to become ill if they breathe in infected droplets or are in close physical contact with an infected person.

Approximately 90% of people who are not immune will develop measles if they share a house with an infected person.

Symptoms will appear about nine to eleven days after the initial infection.

The symptoms of measles always include fever and at least one of the three C’s:

The other Symptoms may include:

The rash normally begins behind the ears & spreads over the head & neck. After a few days, it spreads to the rest of the body, including the legs. As the spots grow, they often join together.

Most childhood rashes are not measles, but a child should see a doctor if:

Being Unvaccinated: Measles primarily occurs in unvaccinated children. Most children & adults who receive a measles vaccine do not experience side effects. In exceptional cases, the vaccine has been linked to seizures, deafness, brain damage & coma. It is necessary to note that these dangerous side effects from the measles vaccine occur in less than one out of every million doses of the vaccine given. Numerous studies have confirmed that there is no link between autism & immunizations.

Vitamin A deficiency is also a risk factor for measles. Children with too little vitamin A in their diets have a higher risk of catching the virus.

International Travel: If an unvaccinated person travels to a country where measles is highly prevalent,  they are at a higher risk of developing the disease.

The diagnosis of measles is mostly clinical. The appearance & clinical history of the patient suggests the diagnosis. Measles should always be considered in a patient who has a high fever & characteristic rash. Until the rash appears, the presence of Koplik’s spots should help in diagnosis. It is recommended that the diagnosis is confirmed using a blood test for IgM, a type of antibody against the virus.

Treatment for an established measles infection is mostly symptomatic. However, some measures can be taken to protect vulnerable individuals who have been exposed to the virus.

Post-exposure vaccination: Non-immunized people, including infants, may be given the measles vaccination within 72 hours of exposure to the measles virus to protect against the disease. If measles still develops, the illness usually has milder symptoms & lasts for a shorter time.

Immune serum Globulin: Pregnant women, infants & people with weakened immune systems who are exposed to the virus may get an injection of proteins (antibodies) called immunoglobulin. When given within six days of exposure to the virus, these antibodies can prevent measles or make symptoms less severe.

Fever Medicines: The person can take over-the-counter medications such as paracetamol to relieve the fever that accompanies measles.

Use caution when administering aspirin to children or teenagers. Though aspirin is recommended for use in children older than age three, it has been linked to Reye’s syndrome, a rare but potentially life-threatening condition in children.

Antibiotics: If a bacterial infection, like pneumonia or an ear infection develops while you or your child has measles, your doctor may give an antibiotic.

Vitamin A: People with lower levels of vitamin A are more likely to have a more severe case of measles. Giving vitamin A may reduce the severity of the measles. It is given as a large dose of 200,000 international units (IU) for two days.

If you or your child has measles, always keep in touch with your doctor as you monitor the progress of the disease & watch for complications. Also, try these comfort measures:

What to expect from your doctor

Your doctor may ask that you come in before or after office hours to reduce the risk of exposing others to the measles. Also, if the doctor believes that you or your child has the measles, he or she must report the findings to the local health department.

Your doctor is likely to ask you some questions, such as:

Make sure that you or your child stay well-hydrated. Pediatric electrolyte solutions or sports drinks can help you stay hydrated & maintain your electrolyte balance.

If someone in your family has measles, take these precautions to protect vulnerable family & friends:

The MMR vaccine is given as a part of the routine vaccination program. One dose is usually given at 12-13 months and a second dose is given between three and five years of age.

If they’re an immediate risk of measles, a dose of the MMR vaccine is given to anyone over six months of age. These situations include

There is an outbreak of measles in that particular area

Planning to travel to an area where the infection is present.

Children who have the vaccine before their first birthday should receive a further booster dose at around 13 months of age and before they start school.

Human normal immunoglobulin (HNIG) gives short-term and immediate protection against measles. It is usually given for people exposed to measles:

Babies who are under six months of age.

People with Weak immune systems: HIV or a person undergoing treatment for leukemia.

HNIG should be given within six days of exposure.

Measles is a viral disease that spreads easily.

2) What are the symptoms of measles?

The symptoms of measles are a runny nose, fever, cough, rash all over the body.

3) How is measles treated?

There is no precise treatment for measles. Medications are given to reduce the symptoms

4) How is measles prevented?

Measles can be prevented by giving the measles, mumps, and rubella (MMR) vaccine. If the MMR vaccine is not suitable for the person, a treatment called normal human immunoglobulin (HNIG) is used if the person is at risk of developing measles.

Apollo Hospitals has the Best Pediatrician in India. To find the best pediatrician doctors in your nearby city, visit the links below: